We’re back at the Vancouver Film festival for the third year in a year and unlike the 08 and 09 festivals I’m going to not only try and write about the films we see before six months have passed, but day by day as we watch them. We’ll see how it goes. Anyway, we arrived in town this afternoon and made it to two films tonight.

Made in Dagenham – Sally Hawkins is already getting some Oscar buzz for her performance in this crowd-pleasing dramatization of a strike at a Ford plant in the UK in 1968.  The workers are the 187 women (out of 55,000 in the country) who sew the interiors of the cars together, and are classed as unskilled labor and make far less than comparable male workers.  The strike quickly becomes about equal pay for equal work, annoying every man in the country (except Bob Hoskins, ho helps the striking women out).  Hawkins is excellent as the leader of the strike, she manages to be both shy and fiery at the same time (and she deserved the Oscar a couple years ago for Happy-Go-Lucky, so even if this performance isn’t as singular as that one, I wouldn’t begrudge her any hardware she gets for it).   Miranda Richardson does a lot of funny yelling as the government minister who follows the strike from a distance, and Richard Schiff (from The West Wing) is appropriately menacing as Ford’s American representative.  Rosamund Pike, as the wife of one of the Ford execs his is nonetheless sympathetic to the cause gets the best speech in a film chock full of speeches, when she explains to Hawkins who her advanced degree from Cambridge somehow doesn’t keep her husband from treating her like she’s an idiot.  Cinematically, the film isn’t much to look at.  The draw here are the big performances and lefty reassurances. 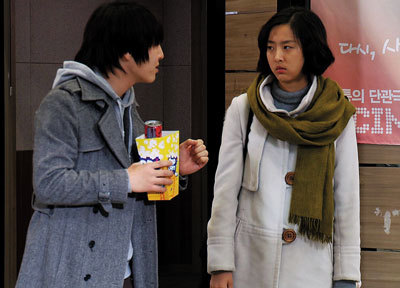 My Film and My Story – At the opposite end of the budget and profile level is this student group project from Korea.  Seven different kids at Konkuk University each directed one segment of this film about workers at a single-screen movie theatre on campus.  The theatre is in the final stages of renovation before reopening (assuming they can win the support of the government), and the newly hired staff and strange customers have a series of mostly comical adventures.  Two guys watch Happy Together and start to question their sexuality, a girl vehemently rebuffs the advances of a kid who talks about Lacan, another girl collects ticket stubs and nitpicks the temperature, but sleeps through the film and so on.  It all looks quite polished (with only one sequence standing out narratively and visually from the whole, its placement at the film’s midpoint is certainly intentional), though the sound is a little rough at times.  Best of all the sequences is one involving the manager of the theatre as she talks to her bartender about the cinema and why she loves it.  It’s not as ambitious as Tsai Ming-liang’s Goodbye, Dragon Inn, but it is more grounded in reality and the day-to-day life of the people who actually work in theatres, which doesn’t make for a transcendent film-going experience, but certainly a pleasant one.