The military as a vehicle for the assimilation of a despised minority is an oft-recurring subject for John Ford, hanging around the margins of the cavalry trilogy (Ward Bond in Fort Apache, for example, whose medal of honor isn’t enough to raise him in class high enough from his Irish immigrant statue for Henry Fonda’s snobbish Col. Thursday). Ford explores this in greater detail here, but through the lens of the 9th Cavalry, the ‘Buffalo Soldiers’, many of them ex-slaves who spent the latter half of the 19th Century fighting America’s Indian Wars. The theme song lays out the impossible standard Sergeant Rutledge, who carries with him always the paper that made him a free man 20 years earlier, must hold himself to: he must be better than the best to survive, let alone hope to thrive.

Have you heard about a soldier in the U.S. Cavalry
Who is built like Lookout Mountain taller than a redwood tree?
With his iron fist he’ll drop an ox with just one mighty blow
John Henry was a weakling next to Captain Buffalo.
He’ll march all night and he’ll march all day
And he’ll wear out a twenty mule team along the way.
With a hoot and holler and a ring-a-dang-do.
Hup-two-three-fo’ – Captain Buffalo! Captain Buffalo!
Said the Private to the Sergeant ‘Tell me sergeant if you can
Did you ever see a mountain Come a-walking like a man?’
Said the sergeant to the private, ‘You’re a rookie ain’t you though
Or else you’d be a-recognizing Captain Buffalo.’

And the thing is, Rutledge, as we see him and as Ford frames Woody Strode, towering over everyone else in the frame, stiffly formal in both posture and diction, the very model of a soldier, actually meets that Bill Braskian standard.

And yet he very nearly gets lynched anyway. 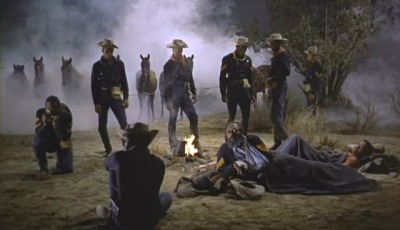 Rutledge is accused of the rape and murder of a white girl, and the killing of her father, his commanding officer. The story is told in a series of flashbacks during the court martial, with each new witness moving the story forward in time. All the circumstantial evidence points toward Rutledge, but Jeffrey Hunter, as a cavalry lieutenant and Rutledge’s attorney, saves him, by dramatically uncovering the real killer. But this isn’t an example of the helpless black man being rescued by the benevolent white person. Hunter never pities Rutledge and he’s not his friend. Their relationship is one of mutual respect, not sentimentality. Hunter does his duty as an officer and recognizes and admires that same sense of honor in Rutledge. But they are never peers, there is no vision of universal racial harmony. Such a thing is inconceivable.

Not only does Ford avoid the patronizing stance of so many liberal do-gooder movies, from To Kill a Mockingbird to The Blind Side, he exposes that paternalism in both its condescension (the court martial judges congratulating themselves for not mentioning Rutledge’s race, a twin of the bourgeois hypocrisy seen in Billie Burke, Mae Marsh and their old white lady friends giddy over the prospect of hearing the lurid details of the crime) and more nefarious manifestations (at the conclusion of the trial, spoilers).

Beyond that, Ford gives not just a proud dignity and pathos to Rutledge, but allows for complex characterizations of his fellow 9th Cavalry troopers. I cannot recall a single film I’ve seen from studio-era Hollywood that featured a scene like the extended one Ford gives us of black men talking and reasoning among themselves, with nary a white person in sight, as they wrestle with the moral complexity of what their proper course of action should be with respect to Rutledge: to protect him and help him escape white (in)justice or do their duty as soldiers and follow the letter of the law. In fact, I have trouble thinking of any Hollywood directors today who would film such a scene.

But Ford played a Klansman in Birth of a Nation.

2 thoughts on “On Sergeant Rutledge”