Up in the Air – It’s one of those movies that tries to enact as profound and movie an existential or emotional crisis that surely the main character would have resolved long before the event in the film take place. Meaning, George Clooney’s cynical loner, a guy who lives to travel and fire people, surely would have experienced the temptations of love and family before middle age, wouldn’t he? If so, what did he learn here that he hadn’t already learned? Are we to believe that a character who has spent enough time developing his philosophy of unattachment so as to give lectures on it had really never once had a chance at a romantic relationship? And he looks like George Clooney? The characters played by Anna Kendrick and Vera Farmiga are nicely played and are much more believable, so the film isn’t a complete loss. They help raise it to solidly mediocre. The #28 film of 2009. 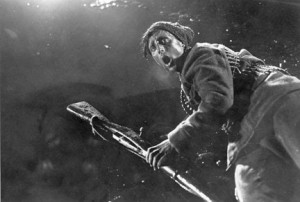 October – Sergei Eisenenstein’s film reenactment of the Russian Revolution on its tenth anniversary. The action can be very difficult to follow if you don’t already know what happens (and I only read half of its source, Jack Reed’s Ten Days That Shook the World), but you get the general idea: the Bolsheviks win (Spoiler alert!). There is, as you would expect, a lot of montagey goodness, especially in an early sequence of the Provisional Government cracking down on the people (and at least one horse) that’s like a miniature version of the Odessa Steps sequence from Potemkin. The finale, though, doesn’t seem nearly as exciting as it should, but that may be history’s fault, rather than Eisenstein’s. It is a lot of fun to see how he demonizes Provisional Government leader Kerensky: it’s kind of a preview of the effects Eisenstein would use in the Ivan the Terrible films (based on lighting and staging more than editing). The #4 film of 1928.

Bride of Frankenstein – I rewatched James Whale’s Frankenstein before this, and liked it a lot more than I remembered. And I liked it more than this sequel, which I understood was supposed to be superior. Colin Clive as the mad doctor is quite sympathetic in the first film: a good man driven crazy by his own ambition and knowledge who comes to recognize and atone for his sins. In the second, he’s a patsy, pushed around and manipulated by the pure evil Dr. Pretorius; a cardboard mad scientist if ever there was. There’s some nice sequences with the Monster of course, as Boris Karloff learns to talk and makes friends with a blind violinist. And the payoff with the creation of the Bride at the end is justifiably iconic. It’s a lot of fun, but the first film resonated more with me. The #9 film of 1935. 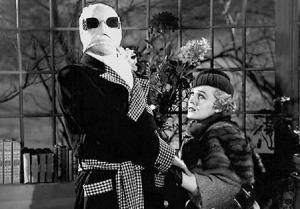 The Invisible Man – Another James Whale mad scientist film, with Claude Rains as the man who experiments on himself with an invisibility drug that has the unfortunate side-effect of making him criminally insane. There follows some great suspense and action as Rains wreaks havoc throughout the English countryside as the police and his former colleagues try to find him and stop his murderous rampage. The opening sequence with him trying to work in a country inn is marvelous, though Una O’Connor is possibly even more annoying than she was in Bride of Frankenstein. Rains is terrific, acting with just his marvelous voice and the general shape of his face and body. The rest of the cast is pretty good as well (including Gloria Stuart, the old lady from Titanic and Henry Travers, Clarence the Angel in It’s a Wonderful Life). The #9 film of 1933.

Don’t Change Your Husband – Gloria Swanson doesn’t get any close-ups in this Cecil B. DeMille film from 1919. This seems a little too early for that kind of thing, at least for him. Most of the scenes play out in two shots, with occasional inserts for close-ups of objects. DeMille keeps it all moving though, so the film ends up feeling as light and pleasant as its story (and there’s some wonderful fantasy sequences as Swanson imagines what her new life would be like, they’ve got the same spirit of spectacle that would eventually take over DeMille’s filmmaking). The plot has Swanson dissatisfied with her husband (he’s a slob, he appears to eat nothing but onions, he can’t dance), so she divorces him and marries the romantic young man who’s been wooing her. But the new guy turns out to be even worse! He’s a gambler and a drunk and he’s cheating on her with a girl named ‘Toodles’. Meanwhile, Husband #1 has got himself a rowing machine, shaved his mustache and become even richer as the head of the new Hemp Trust (seriously!). Has poor Gloria learned her lesson? It’s really quite a fun film, and it’s always good to be reminded that romantic comedy plots haven’t advanced one bit in at least the last 90 years. The #3 film of 1919.