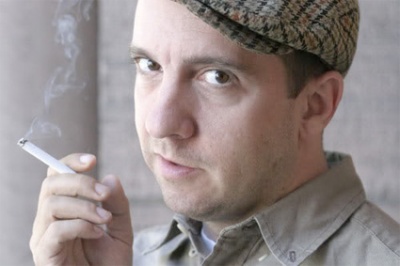 Strange Powers: Stephin Merritt and The Magnetic Fields – A conventional but nonetheless engrossing documentary about, well, Stephin Merritt and his band, The Magnetic Fields.  Merritt’s notoriously difficult to interview, so the intimacy of this film is rather impressive.  Every major member of the band is interviewed, as well as Merritt’s mom herself.  It’s mostly a biographical portrait, charting his life from high school until the Distortion album, hitting the high points (the near universal acclaim for 69 Love Songs, for my money one of the greatest works of art of the 20th Century) and the low (the racism accusations by New Yorker critic Sasha Frere-Jones, which proved nothing but the already established fact that Sasha Frere-Jones is a fucking moron.  Though he was decent enough to basically admit as much both in print and on camera here).  Most of the film though is funny anecdotes about Merritt’s working life, with a special focus on his 25+ year friendship with Claudia Gonson, manager and band member.  Particularly cool is Merritt dumping a pile of his old notebooks on the floor and flipping nostalgically through them.  (Edited to add: The coolest thing was Merritt talking about his favorite artists, particularly ABBA, who he says created such perfectly worked out songs such that when you first hear them you feel like they’ve always existed, which is exactly what I’ve always thought about Merritt’s best songs, particularly much of the 69 Love Songs).  Documentaries like this aren’t generally notable for their filmic qualities, and this one is no exception.  But it gets about as close as one can get to an artist like Merritt, and that’s accomplishment enough.  Plus the score is really great. 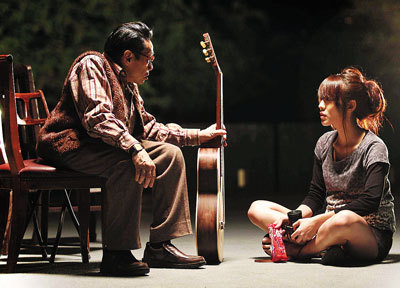 Merry-Go-Round – The second film co-directed by Clement Cheng at this year’s festival (Hong Sangsoo is the only other person with two features at the festival, though as Cheng pointed out during the Q & A, his two halves make one festival film).  It’s totally different in visual style from the kung fu comedy Gallants, though it is thematically quite similar.  Both film’s approach Hong Kong’s past with reverence, and are about the younger generation learning to respect the older.  In this case, its a young woman (the gorgeous Ella Koon), dying of leukemia who goes to HK to find an internet friend who’s been ignoring her.  This friend is the nephew of another woman from San Francisco who has recently returned to HK to prevent his sale of the family’s Chinese medicine shop to developers.  This older woman is obsessed with her own past: she’s also bringing her grandfather’s body back home to be buried in his home town, and she has a series of flashbacks to a romance she had before leaving for America sometime after the Communist takeover of the mainland.  The desire to return a body to one’s home is one of the key motifs in the film, and much of it takes place at a “Coffin Home” where bodies of diasporic Chinese are stored until their families come to claim them.  The caretaker of the Coffin Home is played by Teddy Robin (who was so great in Gallants) and he hires the dying girl and he’s got issues with the past of his own to deal with.  The setup of the film is needlessly complicated, and the first half hour or so is much more disorienting than it needs to be.  But once everyone settles into their places in the narrative and their various histories and interconnections begin to be revealed, the film has a powerful emotional momentum.  It’s about the joy and tragedy of leaving and returning.  Other than the clunky beginning and an over-reliance on the indie rock score in the latter sections of the film (the use of the standard “After You’ve Gone”, however, is excellent), it really is very good.  The cinematography by first-time feature DP Jason Kwan is particularly good, much smoother and more polished than Gallants, though the budget can’t have been much greater.