127 Hours – James Franco stars as one of those Gatorade-drinking thrill seekers that devote their lives to making the rest of us feel lazy who one day gets his arm pinned under a rock and has to endure the title amount of time until he manages the necessary amount of willpower, dehydration and desperation to saw his own arm off and escape.  Danny Boyle throws as much visual noise into the story as he can, making possibly his most frenetic movie since The Beach, which, perhaps coincidentally, was also about an adventurous young man being trapped by his environment.  Stuck as he is in one location, Boyle keeps the focus relentlessly on Franco, who gives what is easily his best performance, equal parts intense determination (his character is an engineer in his non-free (ahem) time), wild-eyed joie de vivre and, at the film’s spiritual climax, real acceptance and understanding.  The movie’s essentially a hyper-caffeinated The Diving Bell & the Butterfly.  It walks a perilous line thematically, as it’s about an amazing individual achievement by one man that spiritually depends upon his coming to understand that he needs other people in his life.  It’s about the paradox that while we humans are capable of doing wonderful, terrible things, we’re probably better off in groups, or at least always leaving a note. 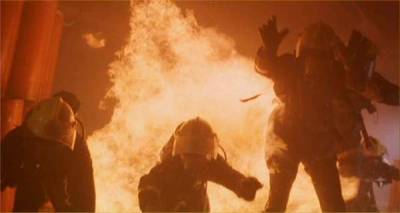 Lifeline – Director Johnnie To’s breakthrough film, one that marked his leap from entertaining genre movies like The Heroic Trio to top-flight action films.  It’s billed as a Hong Kong version of Backdraft, but it’s much better than that movie.  Following a group of characters in and around a HK firehouse, the film alternates intense scenes of firefighters at work with various melodramatic problems in their outside lives.  With 40 minutes or so left in the film, though, those various problems get resolved (we don’t care all that much about any of them anyway) and To gives us an extended, complex and very intense climax wherein the fighters have to rescue people, and their fellow firefighters, from a fire in a massive factory filled with all kinds of nasty chemicals and only two doors(!).  So basically, the film has the exact same structure as John Woo’s Hard Boiled, the greatest action film of all-time.  And while this one doesn’t have Chow Yun-fat or Tony Leung (though Simon Yam is pretty great in his own right) or Woo’s metaphysical dualities (To is never metaphysical, at least not on purpose), it does have Ruby Wong diving into a hole in the middle of a monsoon and pulling an abandoned infant out of a collapsing mud pile.  And that’s something.  The #12 film of 1997. 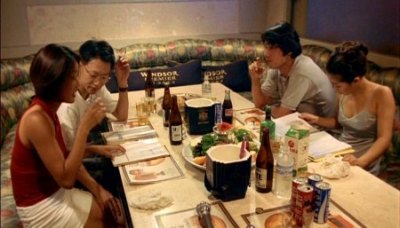 The Power of Kangwon Province – I think Hong Sangsoo gets better with every film he directs, so it was with some trepidation I watched this, his second feature.  Most of the familiar things I love about Hong’s films are already in place: a dual structure wherein the second half varies the events and deepens the themes of the first, a sly, off-hand sense of humor that deflates his largely egotistical and self-involved characters, and a real appreciation for the joys of vacation and binge-drinking.  The first part of the film centers on a trio of girls who spend a few days in Kangwon, visiting the local sights.  One of them (Jisook) flirts with a married local cop and eventually spends the night with him.  In the second half, we meet a university professor, married and currently unemployed who goes to Kangwon on vacation with a friend.  Turns out they’re there around the same time as the earlier girls, and though they don’t meet in Kangwon, they are otherwise connected.  Though there are some moments of that trademark Hong humor here, it might be his most oppressively depressing film.  His later works manage to explore similarly dark territory in the relations between men and women, but they’re more leavened with self-deprecating humor and moments of absurdity.  It’s still a very good film, and I might even prefer it to one later Hong film (Woman is the Future of Man, which I need to see again), but lately he’s operating on a much higher level.  The #14 film of 1998.

The Romance of Astrea and Celadon – Eric Rohmer’s death 11 months ago was a catalyst for me to finally watch some of his films, and I’ve loved every one of the eight I’ve seen so far.  This was his last movie, set in fifth century Gaul and about a community of Druidic shepherds slowly Christianizing.  Astrea loves Celadon, but his parents don’t approve of her, so she has him flirt with another girl, then gets horribly jealous when he does.  She bans him from her presence and he jumps in the river.  He survives, meets some nymphs (one of whom also falls in love with him), lives in a hut for awhile, dresses as a woman and builds a shrine, which is explained to a group of pilgrims in terms surprisingly like the Catholicism of My Night at Maud’s.  You wouldn’t think that the Rohmerian tradition of lengthy conversations about morality and sexuality would translate well to fifth century Gaul, but it does.  It’s the lightest, prettiest Rohmer I’ve seen.  It floats.  The #5 film of 2007.

Disciples of the 36th Chamber – A bizarre melding of the Fong Sai Yuk story into Lau Kar-leung’s 36th Chamber of Shaolin mythology, and one that doesn’t entirely work.  It’s weird, in that traditionally, Fong’s mother (who taught him kung fu) is the daughter of one of the Five Elders of Shaolin, who survived the destruction of the Temple by the Qing.  So when young Fong, here played by Hsiao Ho, is sent to the Temple to train (and learn some humility), things get a bit confused.  And yes, I’m aware of the ridiculousness of complaining about accuracy in a genre where people can routinely leap 30 feet in the air and knock over 20 armed men with a wave of their palm, but what can I say?  I am what I am.  Anyway, Gordon Liu’s San Te, the master of the 36th Chamber, does his best to teach Fong to mellow out, but fails.  And when Fong unwittingly (literally, the guy is really dumb) becomes a pawn in a Qing scheme, the Shaolin monks must come to the rescue in the expected spectacular extended fight sequence.  It’s a perfectly good film, but it feels more like Lau is just going through the motions at this point.  The slapstick comedy isn’t at the genius level of Stephen Chow, or even Wong Jing (part of that has to do with Hsiao Ho, who just isn’t that compelling a presence) and the action isn’t really anything we haven’t seen before, and better, from Lau and Liu.  The #13 film of 1985.

Shaolin Mantis – A much better Lau Kar-leung film is this one starring David Chiang.  He plays a spy sent by the Manchus to infiltrate a powerful anti-Qing family, failure will result in his parents’ execution.  Despite the family’s misgivings, he manages to marry their daughter, under the condition that he never leave their compound.  But eventually, he and his wife try to leave, and must combat the rest of the family, in turn, in their various styles.  Chiang fails initially, goes a little crazy, and invents a new style of kung fu by imitating a praying mantis.  With his new skills, he returns to the family to exact his bloody revenge.  The setup for the film is a bit tiresome, but once the fights begin, the film takes off.  Chiang isn’t as intense or virtuosic a performer as Lau’s adopted brother and frequent star Gordon Liu, and he shows less of his natural charm here than in his films for Chang Cheh earlier in the decade, but he’s still my second favorite Shaw Brothers star of the 70s.  The #12 film of 1978.