The Mission – Maybe Johnnie To’s best movie, the first part of a thematic trilogy with the equally great Exiled and the pretty good Vengeance.  All three are about a group of hired killers who, for the sake of honor, find themselves at war with their boss.  There’s a shoot out in an empty mall (which looks like the same mall as the one in the climax of Jackie Chan’s Police Story) that’s a perfect distillation of To’s style: complex but comprehensible geography, Leone-like stillness, Woo-like cool.  The #3 film of 1999.
Election – Simon Yam and the other Tony Leung compete to be the leader of the local gang.  This first of two films relates the present day organized crime gangs (triads) to their history as anti-Manchu insurrectionist groups.  The sequel demonstrates the ways in which Hong Kong’s gangs are regulated and manipulated by both the local police and the mainland Chinese government.  Johnnie To strips all the pomp out of The Godfather and mixes it into an action movie.  The #5 film of 2005.
A Hero Never Dies – Tweaking a favorite John Woo trope, Johnnie To pits two superhuman hitmen against each other and they find they have more in common than their bosses’ rivalries should allow.  Woo plays it straight, with Catholic notions about the duality of man.  To nods to Weekend at Bernie’s.  The #25 film of 1998.

The 14 Amazons – After all the men of the Yang family are wiped out by insurrectionists, the women take up arms against the villainous army.  Along the way, a bridge is shattered (inspiring Indiana Jones and the Temple of Doom) and they rebuild it out of people.  It was a big hit on its release: people always like to see women fighting.  Action director Ching Siu Tung went on to direct as well, he did Swordsman II and the action choreography in Zhang Yimou’s 2000s epics.  The #17 film of 1972.
My Young Auntie – Kara Hui stars in a comic Lau Kar Leung film.  She’s the titular auntie  who inherits an estate and tries to keep it from being stolen by her dead husbands evil brother.  She’s intrigued and terrified by the modern world, mocked by her nephew (Hsiao Ho) and his friends but everyone joins together to beat up the bad guys in the end.  It’s the best of Lau’s comedies, but I like him better when he’s serious.  The #5 film of 1981.
The Lady Hermit – Cheng Pei-pei is the kung fu master hiding out while she recovers from her last battle with her archenemy.  A young man and woman discover her identity and the three of them work on some new kung fu moves and a love triangle.  Eventually, everyone fights the bad guy.  Cheng is as great as ever, and Shih Szu as the young woman who idolizes her is pretty adorable, but Lo Lieh is relatively bland as the male lead.  Better than the other two films by Meng Hua Ho I’ve seen (Vengeance is a Golden Blade and Shaolin Handlock) but none of them really stand out as great.  The #15 film of 1971. 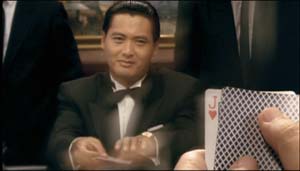 God of Gamblers – Chow Yun-fat is the coolest guy in the world, the best gambler ever who looks fantastic in a tuxedo.  In the midst of preparing to defeat a bad guy in a gambling showdown, he falls down a hill and hits his head on a rock.  When small-time hustler Andy Lau (so young as to be nearly unrecognizable) finds him, he’s got amnesia and has mentally regressed to a child.  Lau discovers his gambling talents and begins to exploit him, but when Chow’s old acquaintances discover him, he and Lau have to find a way to get his brain back in working order (apparently never having seen the episode of Charles in Charge where a blow to the head changes Charles into his evil alternate personality “Chaz”.)  In the end, Chow is back to his awesome self.  The first film in a long running series of sequels and parodies, it’s easy to see why it’s so popular: Chow’s awesomeness mixed with director Wong Jing’s lowest common denominator humor is nearly irresistible.  The #13 film of 1989.