On The Miracle Worker 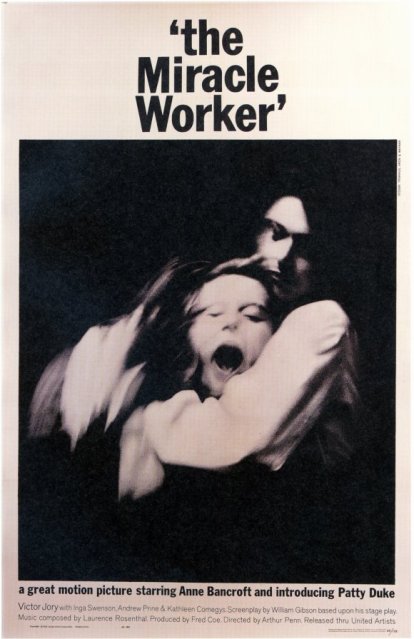 Anne Bancroft and Patty Duke both won Academy Awards in 1962 for reprising their roles as Anne Sullivan and Helen Keller.  They had played the parts together on Broadway, for which Bancroft also won a Tony.  The play itself was written by William Gibson, based on his own script for the TV drama series Playhouse 90.  That pretty much should indicate most of the strengths and weaknesses of the film.  The actresses playing the two leads are really, really good but the script at times veers into the kind of playwriting you expect to see on television: everything is always stated a little too clearly, a little too often.  If you’re not sure why Sullivan is using a particular tactic in trying to teach Keller, don’t worry, she’ll explain it to you at least three times.

Fortunately, also reprising his role from the Broadway show was director Arthur Penn, making his second feature film after the very solid revisionist Billy the Kid Western The Left-Handed Gun, starring Paul Newman.  Penn, of course, is most famous today for directing Bonnie & Clyde and helping to make mainstream the influence of the French New Wave in Hollywood.  Already with The Miracle Worker, though, Penn is starting to break down the classical style into something rawer and more immediate.  While several scenes in the film textually involve nothing more interesting than Bancroft reciting the script’s Big Themes, Penn frames them expressionistically, with deep shadows, odd angles, close foregrounds, etc, which helps prevent the film from descending into the “filmed theatre” trap that ensnared many theatrical/television adaptations in the late 1950s and early 60s (Marty and The Big Knife, I’m looking at you).

The best thing about the film is the centerpiece sequence where Bancroft, as Sullivan, the partially blind teacher is attempting to get Keller, the blind, deaf and mute 7 year old to eat breakfast properly at table.  Because of her disability, Keller’s family has been allowing her to do whatever she wants: wander around the table, grabbing food from people’s plates at will, eating with her hands, and generally making an unholy mess.  For the first time in her life, Keller is told “no” when Sullivan tries to get her to sit still and eat with a spoon.  She reacts with an outrageous tantrum and the two of them brutally fight, destroying the dining room in the process.  Penn films it in a dynamic, unmoored style, putting us in the midst of the action, and extends the scene for a remarkable nine minutes.  The fierceness and reckless abandon with which the actresses throw themselves into the fight is breathtaking: I’d say they earned their Oscars just for this sequence alone.  I can’t think of a better fight sequence in any American film of the 1960s.  Maybe the opening shots of Samuel Fuller’s The Naked Kiss have the same kind of visceral impact.  For a fight scene between two women, it might be unmatched by any film I’ve seen up until Michelle Yeoh and Zhang Ziyi in Crouching Tiger, Hidden Dragon. 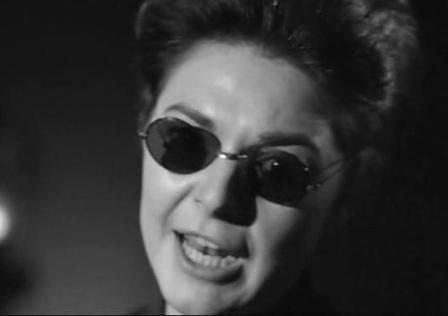 This is one of my favorite things about film.  You can take a heartwarming, inspirational, start-writing-your-Oscar-acceptance-speech-now piece of filmed theatre and in the right hands and the right time, it can manage to become something entirely different, something totally new.  The fight sequence captures the essence of the film better than any of its speeches, and of its grand actorly moments.  If the film consisted of nothing more than it and a few surrounding contextualizing minutes (say from when the family first sets down to eat to when Sullivan emerges triumphant only to be told that it’s now time for dinner) it would express exactly the same themes, have exactly the same meaning.  Instead of Sullivan’s determination and unwillingness to accept Keller as a lesser human being, one unworthy of being treated like anyone else (the soft bigotry of low expectations?) being explained in painstaking detail like it is in the rest of the film, we see it in action and understand it better than we ever would otherwise.  It’s a little bit of cinema at the heart of a TV play.