Once again in the same film but not yet as an official comedy team and hardly in any scenes together at all, this film does feature both Stan Laurel and Oliver Hardy.   It’s part of a series Hal Roach was trying in 1927, the All-Star Comedy series, in which various contract players were mixed and matched with varyingly prominent parts, from leads to bit players.  Mae Busch gets top billing here, though Laurel probably has the most screen time and James Finlayson plays the ostensible lead character.  Hardy has only a very minor role (he nonetheless makes the most of it).  Finlayson plays a rich, married businessman, Laurel his employee (a title card claims Laurel has a “commanding power over women”).  Finlayson’s old flame Busch appears brandishing a photo of the two of them in swimming attire and threatening blackmail unless he pays her off at 7 o’clock.  Finlayson, however, is with his wife hosting Hardy and his wife at that time, so he gets Laurel to try and keep Busch away.  This fails, of course, and when Laurel and Busch arrive at the dinner party, mildly amusing antics and violence ensue. 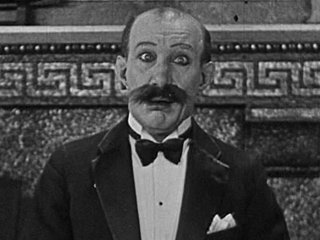 Finlayson doesn’t work very well as a lead.  Short, slight and bald with a broad fake mustache, his go-to comic move is to look at the audience, bug out his eyes and wiggle his whiskers.  It’s cute in its own way, but he uses it way too much.  Laurel, by comparison, uses his own trademark mug (facing the camera and making an exaggerated “weeping” face) only once in the film, where we get Finlayson’s fourth wall shattering twitch a half dozen times in the film’s first reel.  Finlayson would go on to play supporting roles in many Laurel & Hardy films, for which I’m sure he’ll prove to be much more suited, lasting in Hollywood until Royal Wedding in 1951.

Mae Busch, on the other hand, is pretty funny.  In the opening sequence, she gets to hide from Finlayson’s wife behind a paper towel dispenser, which is as silly looking as it sounds.  In the middle section of the film, where she fights with Laurel in a restaurant, she doesn’t really do much other than hit Stan and yell (Laurel steals this with some wonderfully non-sequiter stunts: falling down the stairs followed by being sniffed by the maitre’d for alcohol, opening a door into his face (a move I practiced often in high school and that I still think is hilarious) followed by the flying hat trick (when you put the hat on your head, only to have it pop off onto the floor) and backing his car into a much odler old car that immediately collapses in a heap of junk) but once they get to the dinner party and Busch faints (there’s an errant bit of gunfire), she shines.  Laurel and Finlayson have to figure out how to get her unconscious body out of the house, and she plays the role of a limp body perfectly (imagine Weekend at Bernie’s type antics).    Busch, too, would go on to appear in many Laurel & Hardy films, often playing Hardy’s wife.  She started in Hollywood in 1912, had what appears to have been a big role in Ertich von Stroheim’s 1922 blockbuster Foolish Wives and worked continuously until her death in 1946.