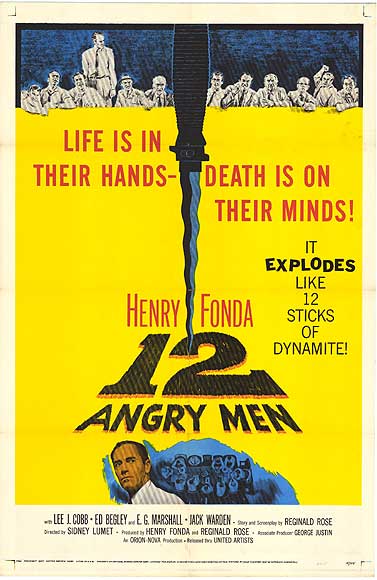 Hey, that guy!
And that guy!
Why are those guys yelling?

Isn’t it nice how everyone changes their verdict in order of their likability as human beings?  The last four are the racist, angry dad, robot capitalist and wishy-washy ad guy while the first four to vote not guilty are liberal superman in the white linen suit, super nice old man, nice quiet guy from the slums and I Believe In America immigrant guy.

There’s no way any of this would be allowed to take place in a real jury room, would it?  Let me check the wikipedia. . . .

(Sonia Sotomayor) told the audience of law students that, as a lower-court judge, she would sometimes instruct juries to not follow the film’s example, because most of the jurors’ conclusions are based on speculation, not fact.  Sotomayor noted that events such as Juror 8 entering a similar knife into the proceeding, doing outside research into the case matter in the first place, and ultimately the jury as a whole making broad, wide ranging assumptions far beyond the scope of reasonable doubt (such as the inferences regarding the “Old Woman” wearing glasses) would never be allowed to occur in a real life jury situation, and would in fact have yielded a mistrial.

Is it OK to have a courtroom drama with a criminally bad defense attorney if the characters talk about how bad they think the defense attorney is?  This can’t have been that difficult a case to handle, right?  Isn’t checking if the eyewitnesses wear glasses taught on the first day of criminal trials 101?

It would have been interesting if the film actually dealt with race.  I mean, everyone turning their backs on racist guy’s hate speech is nice and all (let’s all ignore racism!  that’ll shame it into going away!), but the kid in question isn’t even specifically ethnic at all.  I thought he looked Greek or Italian, wikipedia says he’s often Puerto Rican.  I guess twelve white guys sitting in judgement on a black kid from the slums would have raised more complicated issues in 1957.  Edge of the City at least tried.

The acting’s good, I guess.  Fonda doing his Fonda thing.  Maybe one of his 15 best performances.  I dug Martin Balsam as the whiny foreman, especially in the beginning.  I lost interest in his “hey this is a play so i get to give a speech now” speech though.  Lee J. Cobb once again does Lee J. Cobb things.  I wonder if there’s a movie with Lee J. Cobb and Rod Steiger together.  That’d be one exciting bit of showy method shouting, wouldn’t it?  E. G. Marshall I liked the best, but that’s probably just because he was forced to underplay, seeing as his character was an android.

Ebert quotes Lumet’s book on filmmaking as to the techniques he used to increase the claustrophobia and tension as the film goes on (camera moves from above to eye level to below through the film; lens changes shrink the perceived space).  That’s cool, I guess.  Contrivances like that would be more effective if the script wasn’t already so tightly schematic.  I feel the claustrophobia and suffocation not from the closeness of the space, or the heat of the simulated day, but from the airlessness of the screenplay.  It’s so tightly controlled, all in the service of its hit-you-over-the-head message that there’s no room to breathe.  No spontaneity, no reality.  The film has a lesson it wants me to learn and it won’t let me leave until my brain’s been pounded to mush.

That even might be OK if it was an interesting lesson.  But no, the message is “Jury trials are swell!  See how great humans can be when they get together and talk!  All we need to do to defeat evil and prejudice and hatred is talk it out, man!”  Not only is that wrong, it isn’t even particularly close to true.  Well, juries are swell, that’s true.  Yay America!  For adopting a legal custom dating back thousands of years and codified in the English-speaking world for 800 years!  USA!  The rest is a liberal pipe dream that only works in the scenario because it stacks the deck so egregiously by making evil ugly, stupid and incompetent.