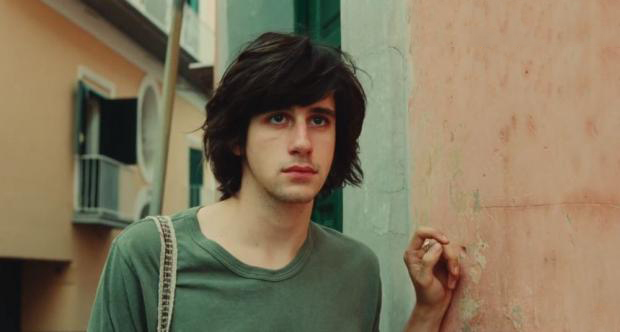 The latest film from Olivier Assayas has apparently been retitled After May (a direct translation of its French title, Après mai) for its US release, but I do like this festival title better (though the classic Thunderclap Newman song does not appear in the film).  The original title’s reference is most likely lost on the American audience, which isn’t likely to be familiar with the protests and riots, both political and cinephilic, that rocked Paris in the spring of 1968, but the details aren’t particularly relevant to the story, which fits neatly into the semi-autobiographical coming-of-age-in-the-70s category with films like Almost Famous or Dazed and Confused.  It also, somewhat unexpectedly, makes a neat companion piece to Assayas’s last film, the epic Carlos.

Where that film chronicled the eclipse of ideology by the sheer enjoyment its hero found in acts of destruction, in this one we see the idealism of the leftist political movements of the 1960s dissipate as its teenage protagonists grow up.  The story focuses on Gilles (played by Clément Métayer), an apparent Assayas stand-in, a bookish type who partakes in some (ineffectual) protests, argues the finer points of ideology but is increasingly more interested in girls and art (he’s a painter).  After a bit of vandalism backfires, Gilles and his friends go into hiding, cleverly disguised as a rich kids’ summer vacation in picturesque Italy.  He begins a romance with Lola Créton’s character Christine, a more committed, and very cute, activist while Gilles’s best friend Alain hooks up with a redheaded American (she “studies sacred dance. In the Orient, they still dance for the Gods”).  Meeting up with a radical film crew provides some of the film’s best lines: interested in filmmaking, Gilles asks if he can borrow their equipment sometime and is told “We only do agitprop, we don’t lend for fiction.”  Later, after the filmmaking collective shows one of their documentaries they lead an Q & A, which leads to a priceless encapsulation of the cul-de-sac that is radical politics as different factions of audience and filmmaker argue over whether a “revolutionary cinema requires a revolutionary syntax”, or if revolutionary syntax is simply the “individualistic style of the petit bourgeoisie” and that what they need to do is “enlighten, not shock the proletariat”.  Gilles sums them up later as “boring films with primitive politics”.
The second half of the film, as the kids return home and go their separate ways, is a delicate balance of disillusion and hope for the future, as Gilles becomes less interested in politics and more in love with art and filmmaking in particular.  While Gilles gets a job working for his dad at a TV studio and watches and reads about movies in his free time, along with putting together trippy light show for rock bands, Christine remains a committed lefty while Alain and the redhead drift.  The requisite “decadent 70s” sequence is set at a house similar to the one in Assayas’s Summer Hours.  But where the party that ends that film is all golden sunlight, cheery kids, innocence and beauty, this one is a druggy, fiery haze ending in chaos, death and Captain Beefheart.
In Carlos, Assayas chronicled the descent of 60s radicalism into the kind of nihilistic violence we call terrorism today.  With this film, he tackles the flip side of that same subject, as leftist idealism fragments both in the face of bourgeois temptation (drugs, money, art) and under the weight of its own radicalism.  All radical movements crumble for the same reason: purity becomes more important than reality and the radicals cannibalize themselves (see what’s going on in the GOP right now).  That’s why we’re a little sad to see Christine still helping the collective schlep their boring films around to increasingly small audiences of like-minded radicals, though she alone has remained true to their youthful ideals.  She seems happy, and certainly admirable as a person, but somehow diminished.  Gilles on the other hand is open and expansive, absorbing politics as he absorbs everything else he encounters before eventually moving on to the next discovery, the next world.  We leave him working on a B movie set at Pinewood Studios surrounded by Nazis and dinosaurs, an artist on the ground floor, looking up.