VIFF 2012: Everybody in Our Family 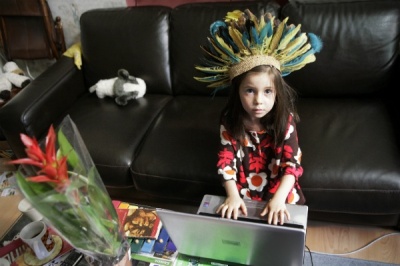 Maybe this is just one of the many strange things about me, but I happen to think that every Romanian film I’ve ever seen is a hilarious black comedy. The Death of Mr. Lazarescu, about a dying man shuttled from hospital to hospital by an indefatigable nurse struggling against an absurd bureaucracy, Roger Ebert compares to the Dardenne Brothers and United 93, and has generally been perceived as both a trenchant attack on health care bureaucracy and a tedious slog (though some reviewers (eg J. Hoberman) did pick up on its peculiar humor). 4 Months, 3 Weeks and 2 Days. . ., about a woman who helps her friend get an abortion despite the communist ban on the procedure, is a textbook suspense-horror film (think the prolonged dinner sequence and the classical “Lewton bus” late in the film) capped by a brilliant, audacious joke in its final scene. But in the US, commentary about the film revolved around the issue of abortion, and the film’s deadpan realism was perceived as a political statement (“The frigid stoicism. . . barely contains the filmmaker’s fury.” – David Edelstein). Even The Rest is Silence, a generally genial period film about the production of the first Romanian feature film, climaxes with a moment of comic horror, as a malfunctioning stage leads to an incineration.

This may be a facet of the American reception of Eastern European film in general. The least ironic of Polish director Krzysztof Kieslowski’s Decalogue, the episode about the death penalty that was expended into A Short Film About Killing, seems to be the most popular one here. Similarly the expansively humanist Red is the most popular of the Three Colors films over the darker, more twisted Blue and White. As well, the Hungarian Béla Tarr is much-noted for the austerity and extreme length of his films, while the comedy (which Sátántangó, a satire of life under collectivism, most definitely qualifies as) is often missed or at least de-emphasized. It seems to me that these film’s comic aspects are overlooked in favor of discussion of their subjects, which just happen to be vitally important political issues in the United States. Thus Lazarescu is viewed through the same lens as Michael Moore’s Sicko (a much less funny film from an ostensibly comic filmmaker) and 4 Months becomes “the Romanian abortion movie”  through which we can learn (ie teach people who don’t agree with us) about the dangers of making abortion illegal. The hot-button subject matter distorts our view of the film, preventing the appreciation of its true, comical, nature. This is a subject for further study. I haven’t seen nearly enough Romanian or Eastern European film to generalize about them, or American reactions to them. But it does seem, thus far, to be a bit of a trend.

Which brings me to Everybody in Our Family, a film by Radu Jude, about a degenerate man with anger issues who takes his ex-wife’s family hostage so that he can kidnap their daughter. The film hasn’t had much of a release yet in this country, so I’m not sure everyone else sees it as the comedy I do, or if this will prove to be another case of the subject of the film trumping its actual content. I guess time will tell. Anyway, it is, like those other Romanian films, shot in a dead-pan, realist style with hand-held camera-work and improvisational-seeming acting. But rather than follow the horror film template of 4 Months, the film is a classic example of comic escalation, a film form that dates back to Laurel & Hardy and beyond. Şerban Pavlu plays the father, Marius, and he looks a bit like a pudgier Robert Benigni. Disheveled and slovenly, he first visits his parents, who berate him for generally being a failure. Then he goes to pick up his daughter for a planned trip to the seaside. Opposed in sequence by his ex-mother-in-law, his ex-wife’s new husband and his ex-wife, he grows increasingly exasperated and violent as the day progresses, eventually beating up the guy and tying everyone up so they’ll be quiet and pretend no one is home when the police are finally called. Pavlu, followed by Jude’s camera, stalks through the overstuffed apartment like a caged animal, but more hamster than bear: his ferocity is mitigated by his and the family’s hyper-verbosity: everybody in this family talks way too much, too loud and all at the same time (some favorite lines of dialogue: Marius to his daughter Sofia, played by Sofia Nicolaescu, who in her wild, unpredictable swings from loving to frightened to playing cheerfully perfectly captures the capriciousness of small children: “I love you my beloved seal”; Marius to Sophia again, a bit later: “Listen carefully. . . Your mom is a bloody whore”; a neighbor lady to Marius as he makes his escape: “May the devil fuck with your lungs.”)

In the film’s most radical move, the stand-off ends not with a bang, but a whimper as Marius gives up and sneaks away, evading the cops and setting out in search of first aid for a bloody cut, the only real injury anyone suffers over the course of the day (at least physically). Jude spends the run of the film slowly escalating the tension to more and more absurd heights, but rather than deliver the punch-line, the final house falling on Buster, he simply lets the tension dissipate into the air as Marius dissolves back into the city streets and the world moves on. 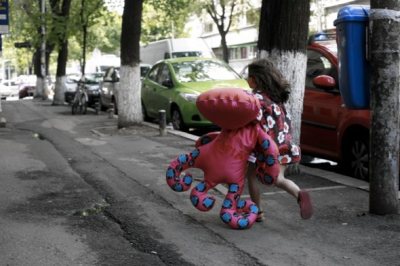