It occurs to me that I’d never actually seen Sammo Hung in a starring role before. I’d seen him as a supporting actor and bit player, and as a director and fight choreographer, but never as the lead. At least not since his late-90s TV series with Arsenio Hall, Martial Law(believe me kids, this was a thing that happened). His reputation is that of a surprisingly agile fat man who helped revolutionize Hong Kong cinema in the late 70s/early 80s by blending comedy and special effects with kung fu (see also: Tsui Hark and Jackie Chan). Eastern Condors seems to therefore be atypical for Hung, as it’s a mostly realistic war movie with occasional comic relief, it appears to be going for a tonal mix along the lines of contemporary American films like 48 Hrs or Lethal Weapon, with the comedy being more physical than character-based.
Blending elements of The Dirty Dozen and Rambo, a group of ethnic Chinese convicts are sent by the US Army to blow up an arsenal they’d recently left behind (the film is set in 1976). On their way, they meet up with three women (Cambodian guerillas still fighting the Vietnamese), a fast-talking con man with a surprising knowledge of martial arts, and a lost Chinese officer. The cast very much feels like a family: Hung plays one of the lead convicts; his lifelong pal Yuen Biao plays the con man; his future wife Joyce Godenzi plays the guerilla leader (her first appearance in an action film and she very nearly steals the movie); Yuen Wah as the film’s final villain, a giggling Vietnamese general; and several Hong Kong directors in smaller roles, including Wu Ma, Yuen Woo-ping and Corey Yuen. These Yuens are not related by the way: Biao, Corey and Wah adopted it as a stage name during their time at the China Drama Academy, the Peking Opera school where they were students with Hung and Jackie Chan, while Woo-ping is the son of Yuen Siu-tien, a longtime actor and stuntman who he directed in Chan’s smash hit Drunken Master. The strangest casting of all is Dr. Haing S. Ngor, the real-life Khmer Rouge refugee who won an Oscar for playing real-life Khmer Rouge refugee Dith Pran in Roland Joffe’s 1984 film The Killing Fields. 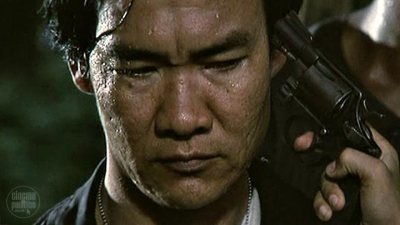 Ngor plays the officer lost behind enemy lines for years and apparently now insane. The film’s most complex set of allusions focuses on him, in a sequence set in a prison camp. As in The Deer Hunter, the soldiers are in partially submerged cages and selected at random to participate in a game of Russian Roulette. Unlike in that film, it isn’t the prisoners pulling the trigger, but Vietnamese children dressed as soldiers and playing with real weapons. When Ngor is selected, a gun is held to his head in close-up in a shot that recalls not only The Killing Fieldsbut the famous photograph of a Vietnamese man being shot in a street, recreated as well in John Woo’s Vietnam epic Bullet in the Head. It’s a profoundly disturbing sequence with reality (Ngor’s real life experience and the photograph) blending with fantasy (The Deer Hunter‘s made-up torture made more disturbing by the participation of children) far more densely than one would expect from a film that most of the time plays as a slapstick comedy.
Hung himself doesn’t say much. Most of the wackiness is provided by Yuen Biao or more the more comic of the soldiers (Yuen Woo-ping and Corey Yuen in particular have a funny and touching final scene together, attempting to hold a bridge against the Vietnamese Army while they slowly die of their wounds). Sammo is mostly the silent hero, kicking ass and making ridiculous stunt leaps and killing people with cocoanut leaves. He lost 30 pounds for the role, so he’s more stocky than fat, but the contrast with Yuen Wah in the final battle is there: short and round versus tall and skinny, both actors remarkably fast. Hung’s speed is what is most remarkable. Many of the early action sequences utilize slow motion to emphasize the purity of the actor’s movements. But the final battle, a showdown between the convicts and the Army, almost exclusively is shot at normal speed, helping to ramp up the excitement. On one viewing, I can’t say how much Hung’s quickness is the result of under-cranking the camera or just his own ability, but either way, it’s impressive to see.
Definitely a subject for further research.

One thought on “Summer of Sammo: Eastern Condors”