Summer of Sammo: My Heart is that Eternal Rose

I’ve declared this the summer of 2013 to be the Summer of Sammo. Throughout these months I’ve been writing about films starring or directed by Sammo Hung, as well as other Hong Kong genre films of the Sammo Hung era. Here’s an index.
A triad love story movie that stars Kenny Bee, Joey Wang, Tony Leung, Gordon Liu and Ng Man-tat (Stephen Chow’s frequent sidekick). Directed by Patrick Tam and (partially) shot by Christopher Doyle and produced by John Sham (one of the Lucky Stars).
If only one of Chang Cheh’s stars like David Chiang or Ti Lung, or even Sammo himself had somehow been involved, this would represent the ultimate expression of Hong Kong cinema. It would be to the Summer of Sammo what Dressed to Kill is to the Caine-Hackman Theory.
Anyway, great movie, though Tony and Gordon appear to have lost bets and were thus forced to wear John Stamos’s hair. This leads to one of the more unforgettable images in film history: Gordon Liu wearing red pants and a gold jacket, sitting cross-legged and sleazy and eating a banana, fanning himself with his own toupee. 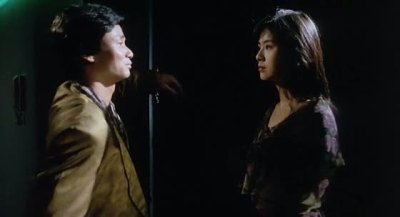 The plot itself is an interesting variation on the heroic bloodshed genre. Those films are usually built around a conflict between morality and the dictates of a Code. This film is structured as a series of moral dilemmas as well, but the Code itself plays very little part, rather it’s conflicts are based in love, filial and romantic, and its incompatibility with the triad world. The characters find themselves increasingly boxed into scenarios from which there is no real possibility of escape. Joey Wang’s only currency is her body, every time she wants something, the only way she’s allowed to bargain for it is by selling herself, either into prostitution for Michael Chan’s Godfather Shan, or by allowing his psychotic henchman Gordon Liu to sleep with her. Everyone but our three heroes is either depraved, dishonest and cruel or weak and pathetic. Chan’s honorary Godfather title becomes twisted and evil: he is the inversion of Wang’s compromised and impotent father and he declares himself to be God himself: the final arbiter of this Hell. The heroes inability to escape this degraded world doesn’t feel heroic or sacrificial, in the way that similar scenarios play out in John Woo’s films (think of the redemption and hope in Tony Leung’s final boat ride at the end of Hard-Boiled), but rather it simply depicts the inevitability of tragedy and loss in such a center-less moral universe. There’s no alternative, no moments of grace. Merely Tony Leung’s sadness as he floats away.
Young Tony Leung is a revelation, the same year of his breakthrough in Hou Hsiao-hsien’s A City of Sadness finds him playing a totally different kind of role, a callow youth whose innocence and naiveté mask hidden reserves of determination and depth of feeling. Leung is my pick as the greatest actor in film today, and this early work, he’d spent the previous five years or so working in television and light comedies, finds him already performing on multiple levels within a single scene or shot. He won a well-deserved Best Supporting Actor Hong Kong Film Award, his second. He’d won two years earlier for People’s Hero, a film I’d not heard of, but it costars the other Tony Leung and Ti Lung, and was directed by Derek Yee, David Chiang’s younger brother and an ex-boyfriend of Maggie Cheung. The Summer of Sammo is a vast and tangled web. 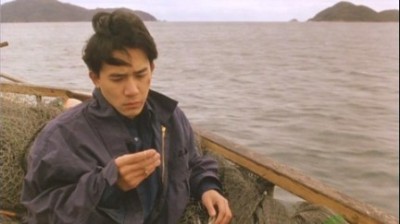