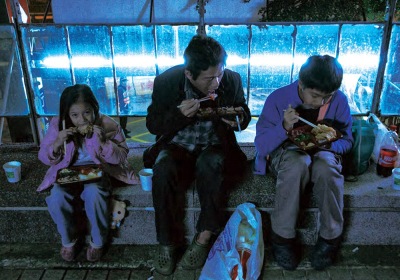 Part of my on-going coverage of VIFF 2013. Here is an index.

The latest film from Tsai Ming-liang finds his hero, played as always by the axiomatic Lee Kang-sheng, in precarious circumstances. When last we saw him (not counting last VIFF’s terrific short Walker, in which Lee was a slow-moving monk just trying to get a McMuffin) was in Visage, where is was directing a vampire movie in the Louvre with Laetitia Casta and Jean-Pierre Leaud. It’s been since that year’s VIFF since I’ve seen that one, but if I remember correctly, his film shoot was interrupted by the death of his mother and a flood of sadness. Stray Dogs is the story of Lee’s life after the flood (at least as far as I understand it after only sitting with it for a few days).

Unfolding in 76 shots over two and a half hours (at least by my count), the film is nonetheless not quite as rigidly minimalistic as Tsai’s other work. At times the camera moves and there’s even a short sequence with some shot/reverse shot editing (an action sequence near the end of the film). But most of the film is made up of very long takes, often featuring very little in the way of action, most notably the final two shots (which echo one from the center of the film) of people looking at an image. (There’s something spirallingly funny about us as an audience staring seemingly endlessly at an image of people staring at an image.) I cannot possibly do justice to how gorgeous the film looks, stunning blues and blacks and white and sparks of color and light and rain and mud and trees and rivers. I haven’t seen all of Tsai’s work, and only a couple in a theatre as opposed to mediocre DVD copies, but this is the prettiest I’ve seen so far. 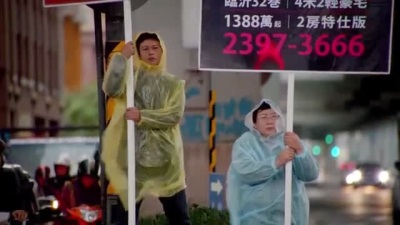 The plot of the film, such as it is, revolves around Lee and his two children, a boy and a girl, as they live homelessly in the industrial rubble of Taipai. The kids spend their days wandering around a supermarket, which Tsai seems to take as a challenge to shoot in the weirdest ways possible (inside freezers and milk displays, from the points of view of the objects on display, frames distorted by reflections and refractions from glass and chrome). Lee makes a meager living as a human billboard, standing in the middle of a busy intersection holding a sign for hours at a time, buffeted by the wind and rain, barely noticed by passing motorists (at one point, a highlight, Lee breaks into song, a stirring anthem about crushing one’s enemies).

Not long after adopting a cabbage as a doll (a cabbage patch kid, get it?), the girl meets a woman (Lu Yi-ching) who works at the market and takes an interest in her, or at least an interest in cleaning her hair. Lu feeds stray dogs at night, wandering through abandoned buildings with freshly expired food products. One night she stands for a long time before a mural, a black and white landscape, and it’s after seeing the mural that she begins to help out the kids, eventually finding where they live. It seems pretty clear that they’d be better off with her, especially after Lee gets drunk and murders the cabbage.

The other woman in the film, Chen Shiang-shyi, opens and closes it. The first shot has her brushing her hair on the bed while the kids are sleeping. The last section of the film takes place in this same house, streaked black and white with flood damage, where Chen and Lee appear to be married with kids. She’s a doting mother, helping with homework, while Lee seems a drone, taking a long bath, sitting in a fancy massage chair, barely acknowledging the birthday celebration they’ve made for him. One night, Lee and Chen go for a walk to feed the stray dogs in the ruin. They look at the mural for a long time and she walks away, leaving Lee, and us, alone in the dark.

So my reading, as of now at least, is that the bookend scenes depict the dissolution of Lee’s marriage. Engulfed in sadness over his mother’s death, Lee has turned their home into a moldy ruin. The wife leaves and takes the kids or does not take them. Either way, they end up desperately needing a mother figure, as Lee proves himself wholly incapable of properly caring for them. Though the kids seem reasonably happy, they live, barely hygienically, in a literal hole in a wall. So being a single dad only teaches Lee how important having a mother is, which in turn only deepens his depression at the loss of his own. Perhaps the middle section of the film is only imagined, Lee working out what would happen if his wife did leave him as he soaks in the tub. Perhaps he still has time to save his family, to move them out of the blackness to the big, airy, white modernist mansion just down the way. We all just want Lee Kang-sheng to be happy.