Running Out of Karma: Ringo Lam’s Prison on Fire

A conventional yet effective prison drama from director Ringo Lam, who appears to have cornered the market on “on Fire” movies with this and City on Fire, also from 1987, along with the next year’s School on Fire. All three were made at the Cinema City studio, where Lam was quickly distinguishing himself from his occasional collaborator, Johnnie To (the two more or less co-directed Happy Ghost III and twenty years later accounted for two of the three parts of Triangle, with the third being by Tsui Hark). The ‘On Fire” films were big hits, capitalizing on Chow Yun-fat’s superstardom, and Lam even attracted a following in the US (he spent some time making Jean-Claude Van Damme movies in the 90s, along with John Woo and Tsui Hark), most famously with City on Fire serving as an inspiration for Reservoir Dogs. 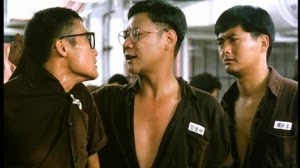 In Prison on Fire, The Other Tony Leung plays the new guy, sentenced to three years for accidentally getting a jerk who had skipped out on the check at his father’s restaurant run over by a bus. Leung is great, tall and skinny with oversized glasses and a look of constant, terrified bewilderment, but his character is unrealistically naive, if not outright stupid. Chow Yun-fat, a veteran prisoner with a happy-go-lucky attitude attempts to show him the ropes (generally leading to Chow slowly shaking his head in resigned disgust as Leung ignores his wise advice). At one point, Chow explains that they’re in the jungle: Chow’s the monkey and Leung’s the lamb, but Leung doesn’t seem to get the point, he keeps trying to impose outside standards of honesty and forthrightness to the prison world. The two run afoul of the local tough guy as well as an evil prison guard (Ho Ka-kui and Roy Cheung, respectively, both of whom are fantastic and menacing, Cheung with teeth-gritting, bug-eyed intensity and Ho with glasses, a slight paunch and utterly conscienceless), leading to some intense and violent confrontations. Both stars get to flip out in slow motion, it’s pretty great.

Prison movies generally function as microcosms of society, providing opportunities for critiques of capitalism or the state or both. Those elements are here in force as well, most explicitly when the prisoners go on a hunger strike because the prison has raised prices for things like cigarettes beyond what they can afford with their meager pay. The prison functions as a pre-union style corporation (workers can only buy from the company store) and as an instrument of state terror, enforcing its arcane rules with the threat of violence while the guards manipulate the prisoners against each other to save their bureaucratic faces. The system explodes for one brief shining moment that recalls an ultra-violent Zéro de conduite, doused in water and blood, but it will quickly reassert control. Leung’s innocent never really wises up, nor does he effectively change anything. The best he can do is get out when his time is up. 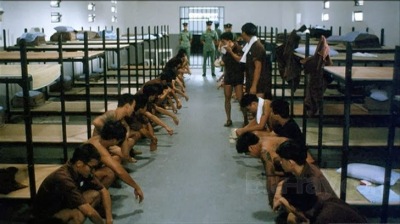