Siegfried, heir to the throne of Xanten, begins his story as an apprentice blacksmith, forging an awesome sword. Having demonstrated his mastery of the craft, he’s sent out into the world where he kills a dragon, bathes in its blood because a bird told him it’d make him invulnerable, kills a dwarf and steals his treasure, then falls in love with Kriemhild, the pretty-ish sister of the Gunther, King of Burgundy. Gunther gets him to use his magic cloak to trick the Queen of Iceland, Brunhild, into marrying him, which Siegfried does, at first gladly and then more shamefully when Gunther (prodded by his evil advisor, the fearsome eagle-helmed warrior Hagen Tronje) basically forces Siegfried to rape Brunhild (while disguised as Gunther) on their wedding night. Then things start to get really tragic.

This is much different from what I was expecting, given what I know of Richard Wagner’s version of The Nibelungen: there are no Norse gods, no Ring, Brunhild’s not a Valkyrie and the story doesn’t end in fire (or the end of Valhalla), at least not yet (as I’m writing this, I haven’t watched the second part of the movie). The Burgundians are Christian, but Siegfried seems to belong to an earlier unspecifically pagan belief system (there’s a powerful contrast between a Christian wedding ceremony in a cathedral and the bonding of blood brothers before a great tree). Lang’s film seems a chronicle of a transition, from mystical pagan to chivalric Christian Germany.

There are narrative gaps that are either the result of sloppiness (possible, lets blame Thea von Harbou for all the film’s faults because she was a Nazi or something) or knowing elisions based on assumed familiarity with the material (the source stories go back centuries, as foundational to German culture as Homer’s epics were to the Greeks): why does Alberich the Dwarf King try to kill Siegfried? How does everyone seem to know about his one Achillean vulnerability? Why can Siegfried suddenly understand bird song? Why is Brunhild’s castle surrounded by fire? Assuming we know Wagner (or other versions of the saga), we’d have the answer to some or all of these questions, but then Lang is counting on our comparing his version to others and noting their dissimilarities, putting in stark relief his major variations: both their religious differences and his reframing the twisted psychodrama that leads to the tragedy in more natural terms: no love potion here, it’s Siegfried’s true love for Kriemhild that leads him to abuse Brunhild for the sake of Gunther. Brunhild comes off best in this world where everyone is a pretty terrible person, though limiting her revenge to just Siegfried seems a bit unfair. But he was the best of them, the one who purported to be a “hero” and should have acted like one. 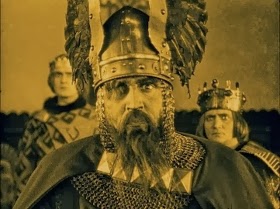 While Part One of Lang’s Nibelungen paralleled its hero Siegfried’s transition form the world of myth (dragons and dwarfs) to the betrayals of reality (intrigue in the Burgundian court), Part Two finds us firmly planted in the actual, no magic helmets or talking birds to be found, just the single-minded quest for bloody revenge by Siegfried’s widow.

As the film begins, she remarries, to none other than Attila the Hun, setting us up for what is sure to be some badass war scenes as she inspires his horsemen to lay waste to the armies of Burgundy, bolstered by the fearsome appearance of Attila himself, by that perpetual avatar of Expressionism, Rudolph Klein-Rogge (who was also married to screenwriter Thea von Harbou, she left him for Lang in 1920). But the war never comes. Instead, years later, after Kriemhild and Attila have a young son, she finally persuades him to invite the Burgundian court to their home castle. Suspecting her foul intentions, Attila agrees, but on the condition that they be safe while they’re guests in his land, an ancient ideal of hospitality and safe passage. Attila won’t be her instrument of vengeance, neutered by fatherhood and his wife’s devotion to her dead hero he spends much of the film sulking and aghast at what unfolds before him.

Lang sets the drama in a relatively few sets, the ahistorical High Medieval style of the Burgundians’ costumes and castles (full chain mail armor, long shields) contrasted with the primitive loincloths and mud brick huts of the Huns. The Burgundians stand erect, tall and blond with their honor stiffening their backs, while the Huns scurry about, low to the ground like vermin or Tolkein’s goblins. Through it all Kriemhild appears impassive, wrapped in a great cloak, single-minded and impervious to reason, dominating and directing the action from dark corners of the screen, a granitic wraith.

What follows is a tragedy of conflicting imperatives as tangled as that in any Hong Kong Triad saga: Kriemhild must exact her revenge, the Burgundians must protect Siegfried’s murderer (the terrifying and ruthless, one-eyed Hagen Tronje) and Attila must not allow the Burgundians to come to harm. Destruction is inevitable given the demands of the honor code. (That the Burgundians’ steadfast loyalty to Hagen despite his many crimes was surely a foundational myth to the cause of German nationalism makes the film all the more disturbing: he may be Hitler, but he’s our Hitler.)

Wagner’s Ring of the Nibelungen (“Nibelung” applies to the followers of Siegfried, alternately applied to the Burgundians, who stole Siegfried’s gold (which he had taken from the Dwarves, called Nibelungs, after killing their King, Alberich) and used it either as the foundation for their great wealth (Burgundy being one of the more impressive pre-Charlemagne kingdoms) or threw it into the Rhine because it was cursed) is based on a different version the story, based on Nordic mythology and focused more on Siegfried and Brunhild. Lang’s follows fairly closely the Nibelungenlied, a epic poem composed somewhere around 1200. Wagner’s story ends with the death of Siegfried, as Brunhild burns his body, rides into the fire and it spreads to Valhalla, bringing about the destruction of the gods. Lang’s story also ends in apocalypse, albeit a terrestrial that leaves Attila the Hun as the most moral man alive.