Tsui Hark’s next major film after a CGI-driven remake of his own Zu: Warriors from the Magic Mountain in 2001, this is a less effects-driven wuxia epic, a riff on Seven Samurai with a Chang Cheh influence (the Northern Chinese medieval warfare of The Heroic Ones comes to mind). A gang of Ching bounty hunters has an Imperial command to kill anyone who knows martial arts, a former Ming minister tries to stop them from wiping out a village (they kill indiscriminately to collect more reward: old people and children too). He goes to a mountain a gets a bunch of swordsmen and fancy swords and they all go to defend the people.

The initial version of the film was apparently four hours long, cut down to two and a half for release, and it feels like it. Most of the characters remain undeveloped or uninteresting, getting by mostly on the charms of the lead actors (who are, to be fair, an impressive group: Donnie Yen, Leon Lai, Charlie Yeung, Sun Honglei and Lau Kar-leung (in his last imdb credit as action director and actor) among them) and Tsui’s feel for color and composition. Sun, most known now for his masterful performance in Drug War, is terrifically demented as the primary villain, but most of the other characters though feel like they had their personality-building scenes removed in favor of pushing the plot along, their histories aren’t particularly compelling and a pair of love triangles seems woefully underdeveloped.

But it’s a beautiful looking movie, if perhaps a little overdone with the flickering firelight. The villains have a great medieval biker gang look to them (black leather and painted faces) and they employ an impressive array of head-snatching weaponry (including what appears to be a giant umbrella). The fights are solid, the highlight being a climactic showdown between Donnie and Sun in a narrow hallway, choreographed and shot well, if a bit limited by the lack of serious fighters in the cast (Tsui covers for Sun and Lai fairly well).

The main problem with the film is its seriousness. Even at his darkest, there’s a streak of subversive wit in Tsui Hark, but this is all straight epic melodrama. The closest the film gets to reflecting Tsui’s impish streak is near the end when quick flashbacks suddenly reveal much of the connective backstory of the various characters’ relationships, things that would have dragged the forward momentum of the action down but made the characters more intelligible. Whether that’s by design (a rejection of Hollywood story-telling convention in favor of straight-ahead plot movement, not unusual at all for Tsui or Hong Kong in general) or by necessity, a by-product of cutting out 90 minutes of the film’s initial running time, is hard to say. 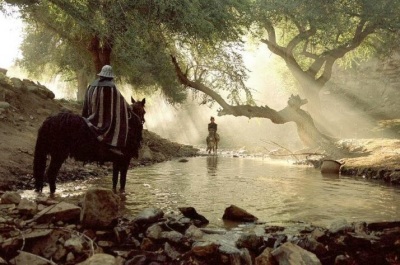 The film was conceived as the first of a six-part series, and though the film did moderately well (it was a big pan-Asian co-production, and it looks like it was filmed on the Mainland to me, with some fantastic locations, purple sunrises and orange steppes and all that) there appears to be little interest in continuing the story (there were a number of spin-offs, a cartoon, a TV series, comic books and such). Tsui seems much more at home in the two Detective Dee films his made over the last few years.