A somewhat misleading title, as the movie doesn’t have anything to do with a zodiac, or really even killers. Instead this 1991 film is a portrait of Chinese students in Tokyo leading desperately miserable lives. Directed by the great New Wave filmmaker Ann Hui, it was apparently an attempt by her to move toward the mainstream by making a modern gangster film, though I’d say she already made that move with the fine 1984 melodrama Love in a Fallen City and her follow-up project, the two-part wuxia The Romance of Book and Sword (which I very much need to see).

Andy Lau, who had one of his first major roles in Hui’s 1982 Boat People, stars as a young student with a tiny apartment filled with the detritus of pop culture (it reminded me most of Marty McFly’s room, actually). He falls in love with another immigrant, the lovely and sad Cherie Chung. Chung loves a Japanese man named Asada, a former yakuza assassin. The first half of the film carefully lays out the somewhat hopeless dreams of the various immigrant characters: one is trying to rise up the ranks of the gangster world, one of Lau’s fellow film students is looking for his old girlfriend, who had moved to Japan sometime earlier and is now lost, various girls are trying to eke out a living while not quite becoming prostitutes for disgusting Japanese businessmen, and so on. The second half follows a more conventional action film structure, with the chase and suspense sequences unfolding while just about all the diasporic Chinese come to tragic, often bloody, ends. 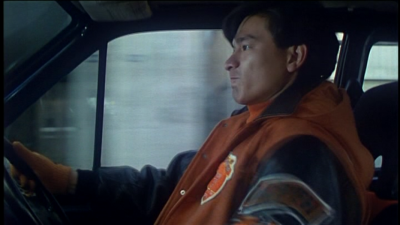 The melding of Hui’s social realism with the heroic bloodshed genre isn’t quite successful. It feels like a significant chunk of the film has been cut out, most noticeably the scenes where Chung meets and falls in love with Asada. As it is, it feel like we jump into a completely different world halfway through the film, and when Lau suddenly finds he has a rival, we have no idea who that guy is. Hui briefly flashes back to Chung and Asada’s first meeting later in the film (an effect she repeats a few other times with other characters, such flashbacks being not at all unusual in these post-A Better Tomorrow movies, though they’re unusually poignant given Hui’s less hyperbolic style). Hui reportedly had some trouble getting the film distributed once production was complete, so I wonder if what survives is a compromised version of the original story. If perhaps the flashback refers to a scene that was in the original cut of the film but had to be removed to get the running time down below the Hong Kong-standard 100 minutes.

Despite all this, Hui’s direction is sure enough and Lau and Chung nuanced enough performers that there’s a real beating heart to this otherwise obvious plot. Hui isn’t as flashy as John Woo or Wong Kar-wai, but her realist images are no less artfully composed: Chung and Lau in a subway station, passing trains briefly separating them; looks up at the skyscrapers of Tokyo as oppressive symbols of unattainable success; a beachside Ferris Wheel that serves as a reminder of Asada’s youth as he too is an exile, even in his home country (a sentiment that also underlies a wonderfully desperate cameo by Kyoko Kishida (star of Woman in the Dunes) as an aged geisha who helps Lau and Chung at a crucial point. The Chinese aren’t the only ones lost in modern Japan.) The editing and performance of the fight sequences is solid but unspectacular and a final chase sequence is wonderfully scored with a ticking, propulsive beat that recalls more the opening of Touch of Evil than the post-Matrix electronic pulses we get today. In one of her last roles before retiring, Chung gives one of her finest performances. Perpetually on the brink of tears, affecting the poses of a demure and deferential young girl, lost in a foreign world, her eyes nonetheless show flashes of a haughty, obstinate determination, as if she knows she deserves better than this terrible world.