Part of my coverage of the 2014 Vancouver International Film Festival.

We’re now a few days into the festival and there’s definitely a different vibe at VIFF this year. The familiar faces are all here, though I’ve yet to see Tony Rayns or Bérénice Reynaud. Professors Bordwell and Thompson are here of course, along with a special guest. Also here are the eclectic mix of Asian films, hits from the international festival circuit and local Canadian products. Crowds are very strong, almost every auditorium I’ve been in thus far has been packed, something I haven’t seen since the 2010 festival — even in the remarkable 2012 year, masterpiece attendance was hit and miss. But the schedule is oddly lumpy, with evenings like the first Friday night stacked with half a dozen want-to-see films while other times (Sunday night, pretty much all of Tuesday) filled with films of the “yeah, I guess I could go see that, but maybe I should take a nap. Or, better yet, drink a mojito in a boot instead” variety. Some big films (the Godard, the Costa) get three shows, while others have only one (the Takahata, which had its sole screening at 11:30 am Saturday morning, as if they assumed the only people who’d be interested in seeing it were children that spoke fluent Japanese (the “print” was subtitled)). The new Hong Sangsoo movie plays twice, but only at the odd time of 5:15 for both shows, which effectively prevents one from seeing sows in the 3-4 and 6-7 block surrounding it. Weird problems of overlap abound. For example: the most appealing of Sunday afternoon’s shows, Listen Up Philip, didn’t get out until 6:25, yet all but one of the next set of shows started at 6:30 (this is why I missed out on the interesting-looking Hong Kong documentary Flowing Stories – it was simply impossible to make it across town in time to catch it). These scheduling issues are inevitable, of course. It’s exceedingly difficult to put together a multi-screen movie schedule (I speak from experience), especially in a festival environment with four or five movies playing a single auditorium every day. And a schedule that’s proven to be a pain for me may very well work great for someone else, or even the majority of festival attendees. One of the great things about film festivals is that everyone makes it their own. But this is the most trouble I’ve had in six years here. Perhaps the remarkable thing is that those other years went so well.

Some highlights from my festival thus far:

The week kicked off for me with disappointment. I knew I was going to miss Isao Takahata’s The Tale of Princess Kaguya, one of my most-anticipated films of the year, because my train wasn’t set to arrive until 11:45 Saturday. I did hope to make the second half of the de facto Princess double feature, however, with Matías Piñeiro’s The Princess of France, playing at 1:45. Unfortunately, my train was delayed, and long lines at the station meant I didn’t even make it to downtown until five minutes before showtime. Undaunted, I proceeded to the next film on the schedule, Eugène Green’s La Sapienza. Like Green’s other films (I watched Toutes les units and Le Pont des Arts in preparation for the fest), it features an unusually declamatory acting style, with a Bressonian minimization of emotion (though notably not as extremely robotic). Also Bressonian is a penchant for introducing scenes and characters with close-ups of their feet, or rather, their shoes. Green apparently is a big fan of shoes (not that there’s anything wrong with that). He films his characters’ conversations at right angles, a two-shot with them facing each other, perpendicular to the camera, followed by medium close-ups of each actor as they face the camera directly and speak in turn, Green not cutting until they’ve finished what they have to say. This combination of effects reminds me very much of Manoel de Oliveira, though the artifice is apparently indebted as much to Baroque theatrical technique as any cinematic fore-bearer. Green is said to be an expert in this, and knowing absolutely nothing about the subject myself, I’m in no position to disagree.

La Sapienza concerns itself with a married couple, an architect and a social worker, who seem very depressed and go on vacation in Switzerland. They meet a young brother and sister and become attached to them. The girl has fainting spells (“wasting sickness” perhaps, which should have died out in 1914, we’re told), the boy is an aspiring architect. The wife sends the boy with her husband on a tour of Baroque churches, while the two women stay behind and have frequent talks. The man is obsessed with the story of Borromini, a dreamer of an architect who had a more rational-minded rival and came to a bad end. As the film progresses, he tells us their story as he explains it to the young man, while Green lovingly points out the marvels they constructed, gorgeous pans and tilts following the lines of their churches as the reach toward the heavens. Like Voyage to Italy, the film’s most obvious reference point, the touch with the past transforms and reinvigorates the middle-aged.

The remarkable thing about the film, aside from the fact that I saw it on a Saturday afternoon, in a sold out auditorium that was 100% into it, laughing at all the right places and genuinely moved, is that it, and Green himself, even exist at all. How wonderful a world is it that provides a space for a weird expatriate-American Francophile, obsessed with Baroque theatre, to make odd little romances about the persistence and continuing relevance of ancient arts and archaic words? Green himself has a role in the film, bigger than the cameos in the other films of his I’ve seen, where he plays an old man the wife meets on a park bench at night. He explains that he is a refugee, a Chaldean from the Ninevah plain, an ethnic group she believed to be extinct. But no, they are still very much around, though in diminished numbers. A more fitting role for M. Green I cannot imagine. 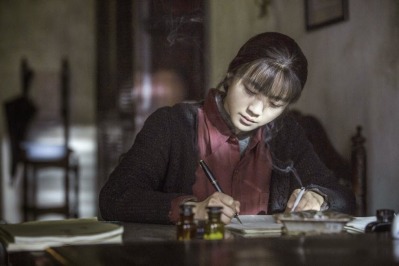 The Golden Era capped my first day at the festival. Ann Hui’s bio-epic about 1930s writer Xiao Hong is long, beautiful and not quite exactly what you’d expect. The only sign of Hui’s usual twisting of expectations is in the film’s narration, with witness interviews in the style of Reds, except the witnesses are played by the same actors portraying those characters in the film proper. Unlike Stanley Kwan’s Centre Stage (a film to which this has been compared, not entirely without reason), the actors never comment about the events as themselves (as also, for example, in Peter Watkins’s La Commune (Paris 1871)), but always remaining in character. It’s an ingenious solution to the difficulty in recreating the life of someone who died young, leaving little in the way of personal history. It effectively captures the ways in which Xiao Hong the person is as much a memory in the lives of the people she met as she has been for the later generations who have discovered her only through her writings (which appear to be exceptionally beautiful tales of misery). But Hui pretty much plays it straight. Only once do the narrational accounts differ, and while Tang Wei’s performance does have some notable shifts in tone, there wasn’t a pattern to the changes that I was able to discern (with one narrator remembering her as happy and jubilant, another as morose, all at the same time, for example). Rather than foreground her experiments, Hui seems content to let her above-average prestige picture play itself out in heart-wrenching yet familiar terms.

Each of my next two days in Vancouver began with a documentary. Sunday was the latest from Frederick Wiseman, National Gallery, about the British art museum of the same name. In a brisk three hours, Wiseman takes us on a tour of the place, following his now well-established structure: alternating long sequences of people at work, both “on-stage” (the tour guides, the restorers) and off (the frame-makers, the construction workers and janitorial crew) and administrative meetings where the war between commerce and art is fought, with breaks in-between made of “pillow shots”, in this case usually close-ups of people looking at the art interspersed with close-ups of the faces in the art itself. He even manages to weasel in a couple of “interviews” wherein he films a person being interviewed, rather than having to break his cinematic code and interview them on-camera himself. It’s great of course. I’ve watched a lot of Wiseman in the last month and I simply can’t get enough of his films, the ones about art especially. It’s beautiful and fascinating and that structure is so entrenched because it works so well to make a very long movie seem much shorter than it really is. But one thing is for sure: next time I go to a museum, I’m going to join a tour. Those guides are terrific. The less I say about the dance scene at the end, however, the better.

Ballet 422, which opened my Monday, owes a very great debt to Wiseman, especially his dance films (Ballet, La Danse and Crazy Horse). Director Jody Lee Lipes follows the Wiseman template (albeit with a very few explanatory title cards, kind of necessary in the beginning to set the story, less so to mark time as the clock ticks on our hero’s deadline. The film follows 25-year-old dancer/choreographer Justin Peck as he has two months to put together the New York City Ballet’s 422nd original production, his first choreographic work on such a large scale. As in the Wiseman films, the movie proceeds from early rehearsal footage through the final performance, with shots of the backstage workers (particularly the wardrobe department) interspersed and pillow shots (prominently close-ups of shoes, again) providing syncopating breaks in the narrative. Again as in Wiseman there are no interviews, the cinematic apparatus remaining invisible (though there is a moment when the cameraman hilariously realizes he can see himself in a rehearsal mirror and quickly reframes his shot). The rehearsal footage is great, as is Peck’s production itself, brisk and lively and charmingly danced by the company, particularly the three leads (Tiler Peck, Stirling Hyltin and Amar Ramasar). The company appears to have a warm and friendly camaraderie: it’s much funnier than the Wiseman films (at one point one of the dancers in the chorus is worried about her outfit. A wardrobe woman tells her: “Girl, you got nothing to worry about: if it comes out, it’s cute.”) The best revelation comes at the end, though, when we see Peck make his way backstage, down an empty hall to his dressing room. He changes clothes and begins putting his makeup on. He’s performing in the third performance of the night, as part of the chorus. Like the generic title indicates: despite all the artistry and inspiration and fun and music and dance, the ballet is, as much as anything else, work.