I think I “related” to parts of Robert Greene’s non-fiction film in the way so many other people “related” to Boyhood, in that when we join her, stay-at-home mom Brandy Burre is very much looking to reestablish an identity for herself outside the home. This manifests itself as one of the main threads of the film’s story: her preparing to restart her acting career after a several years’ hiatus. That need for a creative outlet, for a definition of self that doesn’t revolve around one’s children (and the guilt inherit in that, a little voice telling you that not devoting yourself 100% to your children makes you a bad parent) is something I imagine every parent experiences, especially for those of us who abandon our careers for full-time parenthood. But also, more obliquely and alien to my own experience, this identity shift for Ms. Burre manifests itself in the collapse of her relationship with her partner Tim. This ultimately becomes the dominant storyline of the film: while Burre looks for jobs and gets her hair done and meets with friends, nothing really happens on the job front, but the relationship story unfolds dramatically in time as Tim gradually moves out of the house and we learn ever so little about what actually happened to break them up (both the proximate events and the emotions that underlied it).

But how much of what we see is actually true? Early in the film, during a standard documentary-style “confessional”, Burre says a line and then repeats it, with a different emphasis, as if in another take of a staged scene. This, along with her profession as an Actress, clues us in to be wary of the “actuality” of what we see, at odds with the documentary-style of the film (hand-held camera, live (in one instance rudely interrupted) sound, natural lighting). Some shots are clearly staged, notably a slow motion one of Burre washing dishes in a 1950s style red dress, an image referenced in the film’s poster (and echoed in the old movie posters that line Burre’s home, which are pointedly revealed to not belong to her). Other shots are very “movie” shots: ice breaking up on the Hudson River, a cut to an abstract orange and pale blue of a sunset during one of Burre’s interviews, a shot of her walking along an overpass, briefly recalling Millennium Mambo (a film with which it would make a great double feature) in its sheer movie-star gorgeousness. Half the film looks like “reality”, the other half like “cinema”. 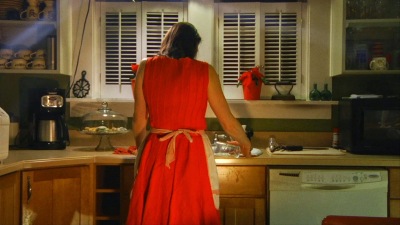 Doubling down on the ontological riddle is the fact that Burre’s conflict is identity-based: she finds herself playing a role (housewife) which is unsatisfying to her. Throughout the film she will adopt a series of other “roles”: singer, yoga instructor, party hostess, wife, daughter, unfaithful spouse, “other” woman, abuse victim, none of which fully encapsulate who she truly is (and some of which are explained away as mistaken identities, as when her facial bruises are explained to be the result of a simple fall but which people assume are domestic violence. At least that’s what she tells us.) In the same way Burre can’t find a single role that defines “her” (though for the outside world “that woman who was on The Wire” seems to apply), we are left knowing that we are unable to understand her or her life. 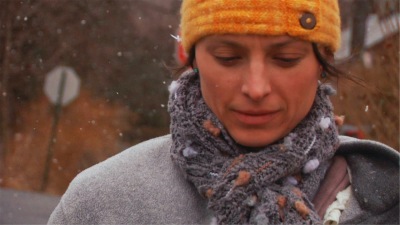 An actor is a relatablity machine. They are the medium through which we experience scenarios, stories, worlds, lives, roles that are (usually but not always) unavailable to us in our everyday lives. Everything an actor does is a lie, and yet, if done in a certain way, the emotions they inspire seem real. Actress is not so much an investigation into Simulation as The Real (or Hyper-Real), as a riff on the unreliability of our understanding of the relationship between cinema and reality. Like a puzzle box with pieces missing, it asks more questions than it answers. It’s a documentary about a woman who is an actress and who may be acting for all or part of the time we see her on-screen. Does it make a difference if the story of her breakup is real or staged? Does it make a difference if her to-the-camera expressions of her emotions are real or performed? Is it possible for the camera to capture the core of a person? Can anybody every really know anyone? 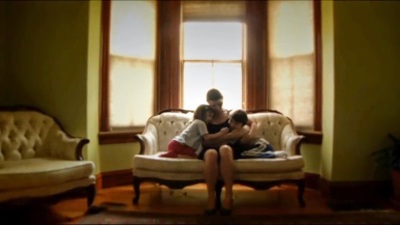 This, I think, is how Actress escapes Boyhood‘s relatability problem (which, it should be said is more a matter of that film’s reception than anything inherent in the film itself). To the extent that much of the critical response to Richard Linklater’s film seemed to rest on the fact that viewers’ saw reflected on-screen their own life experiences, it worked as a kind of self-reinforcement, a form of flattery. I don’t feel affirmed by Burre’s identity crisis, but to the extent that she expresses on-screen a conflict I’ve felt in my own life, I feel complicit in it. By undermining a layer of verisimilitude, Greene encourages not identification but questioning, both of the film’s storyline and of our own relationship to the roles we play. We’re asked to both be emotionally moved by the character while at the same time acknowledging that she is an Actress and that what we are seeing is potentially fake (and just as potentially real). I’ve experienced some of what Burre expresses, but not all of it, do I relate to those things in the same way, do they have the same emotional impact on me? Boyhood tells a story that for many reflects certain aspects of their self, which is fine and good and many films, Actress among them, do the same thing. But Actress pushes further, challenging our understanding of what the self is, asking why we want to see ourselves in performances, as performers.

What I really want to know is: can I nominate Burre for a Best Actress award this year, or not?