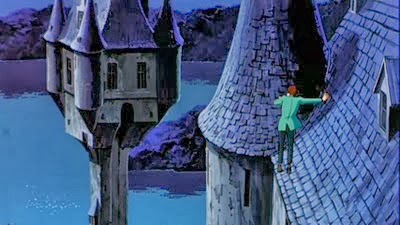 The first Lupin III TV series, based on the manga series by the oddly pseudonymed Monkey Punch, ran in 23 episodes from the fall of 1971 to the spring of 1972, when it was abruptly cancelled. About half the episodes were directed by Masaaki Osumi, the rest by the team of Hayao Miyazaki and Isao Takahata, who would go on to form Studio Ghibli 15 or so years later. The series follows the adventures of master thief Lupin III, the grandson of French literary icon Arsene Lupin (he’s contemporary with and holds about the same cultural status as Sherlock Holmes). Alternating between sophisticated cool and wild bursts of gleeful anarchy, the animated version of Lupin III brings to mind the Monkey King as played by Alain Delon. Each episode follows a particular caper as he and his colleagues, Jigen Daisuke, a ice cool sharpshooter, and Goemon Ishikawa, an anachronistic samurai armed with a sword that can cut through anything, pursue a heist or mystery of some type, usually pitting them against an even worse gang of criminals. They occupy the gray area between the law and the truly villainous, what distinguishes them from evil is not just their sense of honor, but their sense of humor. Floating through the series is a mysterious woman named Fujiko Mine, always teasing and manipulating Lupin with her seductive red hair and mountainous bosom (her name literally means “mountain peaks of Fuji”) as she competes with him for whatever loot serves as the episode’s MacGuffin.

It’s all a great deal of fun, and the early episodes in particular seem shockingly contemporary, with relatively shocking acts of violence and sexual suggestiveness. About halfway through the series though, things become a bit tamer. Rather than seducing the ladies, Lupin begins rescuing damsels in distress. Rather than a dark woman leading Lupin toward destruction, Fujiko becomes a side element, a nice girl who just wants to help out the team. Early in the series she is a Hawksian woman, independent-minded and as ruthlessly capable in every way, if not more so, than the men she uses. But later she becomes just another sidekick, the marginalized love interest. What had been radical gets domesticated as Lupin becomes a goofy scamp rather than the kind of cold-blooded thief who would sit in a jail cell for a year as part of a plan to punish the Inspector who caught him (and himself for allowing himself to be caught). Wikipedia, unsourced naturally, claims that Osumi was fired by the studio “for refusing to adapt the sophisticated series for a children’s audience” which seems about right. It seems like Miyazaki and Takahata were called on to make the series more conventional, and while their version is still a highly entertaining adventure show, it lacks that cutting edge that made the early run of episodes so exciting.

After the show was cancelled, Miyazaki continued odd jobs in television throughout the 1970s. Lupin III was brought back for another, more successful series in 1977, which ran 155 episodes through 1980. A Lupin III feature film was made, followed by another. This second film was Miyazaki’s first as a feature film director (he left Isao Takahata’s production of an Anne of Green Gables TV series, which I very much want to see, to make the movie). I haven’t seen any of this second Lupin III series, but Miyazaki’s film, The Castle of Cagliostro, is consistent with the tamer, lighter tone of the latter half of the first series.

Lupin and Jigen find themselves on the trail of master counterfeiters in the small European country of Cagliostro, where they quite literally must rescue a princess who has been locked in a tower by an evil Count. Packed with intricate suspense sequences as Lupin breaks into the eponymous castle and uncovers its mysteries, the film is Miyazaki’s most generic in construction, with only a few of his signature peaceful moments (as the master thief charms the childlike princess, the reveal of the Castle’s final mystery) and a distinct lack of abstract philosophizing. Note though that as with pretty much every other Miyazaki feature, it is the overwhelming force of nature that powers the film’s conclusion. Much to the film’s detriment, Jigen and eventually Goemon get almost nothing to do. Fujiko shows up for awhile too, now a short haired blonde with no apparent skills or appeal aside from a large arsenal of weaponry and a hideous camouflage jumpsuit, and has very little role in the story, though she does take control of a TV camera in homage to one of the better episodes from late in the show’s run, though she ends up looking dangerously like April O’Neil, girl reporter, from the Teenage Mutant Ninja Turtles series.

Distinguishing Cagliostro from a mere extended TV episode though is the attention to detail in the depiction of the setting, inspired by old Arsene Lupin stories as well as an unfinished feature from 1952: beautiful moss-covered ruins, a vast dungeon filled with the remains of 400 years worth of curious adventurers, ancient aqueducts, trap doors and steeply-pitched roofs for our hero to improbably traverse. Compared with the lackluster animation in efforts put forth in the late 1960s and 70s by the Walt Disney company (the mud grey of The Rescuers or the sketchy, half-finished look of The Aristocats, for example), the film is a revelation. One of my favorite things about Japanese animation (I don’t recall seeing it in earlier forms, but it was probably there) is the way character details change with their distance from the “camera”, with figures becoming more and less abstract. With Lupin, his features become less cartoony as we get a closer look at him (in the TV show we repeatedly get to see how hairy the backs of his hands are as his sideburned face turns more monkey than man). Compare this to, say, the hero in Disney’s Robin Hood: a cartoon fox who remains a cartoon fox regardless of angle or depth. The Japanese style had a subtle way of creating the illusion of depth in a two dimensional world (beyond the simple dedication Miyazaki would show to developing a truly detailed and realistic background setting) while Disney was locked in the flat, planar style they pioneered 40 years earlier, made cheap with xerography. 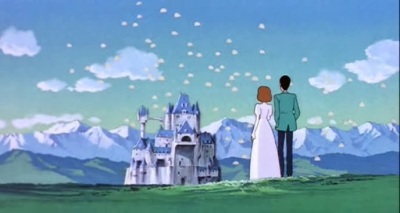 After the success of The Castle of Cagliostro, Miyazaki worked on another TV series, the phenomenal-sounding Sherlock Hound. He also wrote a manga, which became the foundation of his next feature film, 1984’s Nausicaä of the Valley of the Wind. That second film, it seems to me, is the more foundational one to his later work. While occasionally he-ll return to the purer adventure style of Cagliostro (most notably in Porco Rosso), Nausicaä‘s fusion of adventure with myth, fairy tale and contemplative eco-philosophy will recur in almost all his films.