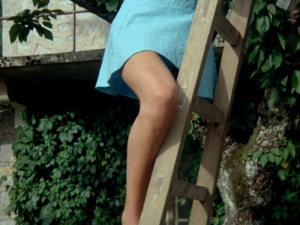 Claire’s Knee – The fifth of Eric Rohmer’s Six Moral Tales, it’s a kind of mellow version of Dangerous Liaisons. Jean-Claude Brialy (from A Woman Is A Woman, though now with an awesome beard) is on vacation at Lake Annecy (which is, like the beach house in La Collectionneuse, a stunning location and definitely a place I’d rather be). He’s about to move to Sweden to get married, when he meets an old friend who eggs him into a flirtatious relationship with a local teenaged girl. He than falls more seriously for the girl’s older sister, or more specifically, certain parts of her. Like the protagonists of most of the Moral Tales, Brialy isn’t a particularly admirable character, but he nonetheless remains both likable and sympathetic. This seems to be something special Rohmer brings to the films, maybe it’s in the leisurely pace, the dialogue and narration-heavy scripts, the visual relations between the characters and their environments, or just something basically decent and humanistic about the way he sees the world. He’s ever curious about behavior, and the lengths people go to to justify that behavior, but he never condemns and encourages that magnanimity in his audience. I can’t ever imagine feeling bad after watching a Rohmer movie. The #2 film of 1970.

It’s really hard not to compare this to An Education, a film with a similar subject, albeit with a different point of view: that of the young girl in a relationship with an older man. Despite that shift, though, the two girls in Claire’s Knee are much more interesting and real than the girl in the newer film, and where Claire’s Knee overflows with generosity and warmth, An Education is bitterness and cynicism, its characters existing, for the most part as cheap jokes or object lessons. 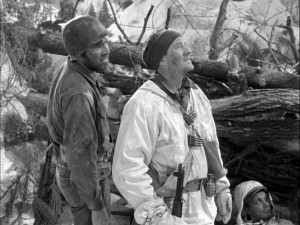 Fixed Bayonets! – Samuel Fuller’s second Korean War film from 1951, it’s not nearly as good as the first, The Steel Helmet. Still, it’s a rock solid movie, a kind of version of the Battle of Thermopylae with a single platoon of 48 men left to hold a mountain pass against the Chinese while the rest of their division retreats. The heart of the movie rests with a corporal played by Richard Basehart who doesn’t want to be a leader because he fears sending men to their death. The film is structured around the deaths of the four men who outrank him, leaving him at the climax to face his fears and lead his remaining men to complete their mission. As always, Fuller is grittier than the mainstream, but the whole thing feels a bit too schematic and doesn’t ever reach the poetic heights of his best films. The #17 film of 1951. 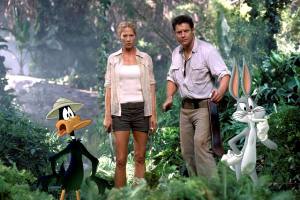 Looney Tunes: Back in Action – Way better than you think it would be. Brendan Fraser stars as a stuntman who gets mixed up with the recently fired Daffy Duck. The two of them take off on an adventure after Fraser’s father (Timothy Dalton) an actor who stars in James Bondish spy movies as a cover for his secret life as a spy. Dalton’s been kidnapped by the head of the Acme Corporation (Steve Martin, in possibly his worst ever performance) for something to do with some kind of jewel that turns people into monkeys. As Fraser and Daffy try to rescue him, their joined by Bugs Bunny and Jenna Elfman (also pretty terrible as the executive who fired Daffy, sent to rehire him). Director Joe Dante’s achievement here is that he truly captures the anarchic spirit of the Looney Tunes cartoons. There are jokes aplenty (visual, verbal, Hollywood satirical) some of them not funny at all, like Steve Martin’s whole performance, but the rapid-fire pace never slows down. The #18 film of 2003. 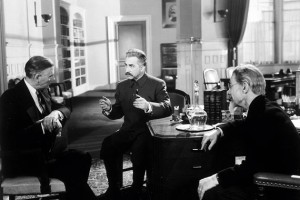 Mission To Moscow – Part of the series TCM’s been running this month on depictions of Russia in American film, this one is truly weird. At the height of World War II, the Roosevelt government encouraged Warner Brothers to make this adaptation of the memoir of the American Ambassador to the Soviet Union in the late 1930s, Joseph Davies. Michael Curtiz directs (it was his follow-up to Casablanca) and the film seems oddly split. On the one hand, it does a yeoman’s job of whitewashing the real concerns Americans had about Stalin’s government (the show trials, the lack of industrial progress, the failures of the 5 Year Plans), but on the other, the film seems to covertly acknowledge that those fears are real. More striking is a show trial sequence, when a number of Soviet officials (all of whom we’d met in the first half of the movie) are put on trial for plotting a Trotskyite coup against Stalin. The trials consist almost exclusively of confessions (which with historical hindsight we can assume were forced), and Davies is there to assuage any doubts as to their veracity. Someone even asks him “How can we be sure these confessions are real?” To which he responds “I’ve been a trial lawyer for 30 years: they’re real.” Now, either he’s the worst lawyer ever, or he’s lying for the sake of propaganda. I think he’s lying and I think Curtiz knows it. It shows in the way he directs the performances of the people on trial. I think. Maybe it just looks that way 60 years into the future. I’d love to know what audiences thought of this film when it was released. The #16 film of 1943.