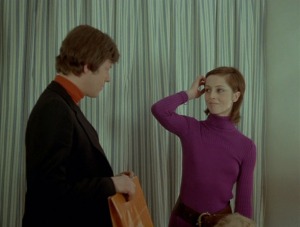 Love in the Afternoon – This is, apparently, a lot of people’s favorite of the Moral Tales, but I think I liked it the least. Part of my problem with it, though, is pretty silly: it has, by far, the worst clothing I’ve seen in a film in a very long time. I know 1972 was an awful time for fashion, but still, this is ridiculous. Sure, it’s kind of cute that the main character, a businessman (Bernard Verley) who has a platonic affair with an old friend (Chloe as played by Zouzou in some really horrifying outfits) while his wife is pregnant, wears nothing but turtlenecks (blue, red, lime green), except when he buys a tight flannel shirt right before meeting Chloe (symbolism!). The best part of the film happens early on, when Verley fantasizes about being able to control the minds of everywoman he meets, and all the ones he meets are the women from the other Moral Tales. A nice little touch tying them all together. This is the only of the Moral Tales wherein the protagonist is already married, in each of the others he’s only in love with or engaged to another woman when faced with temptation. That makes him a bit more reprehensible and also makes the film more conventional: from a relaxed exploration of the male psyche as it tries (and usually fails) to relate to and understand women, it becomes a critique of the banality of bourgeois life. After the other five films in the series, I expect more from Rohmer. The #9 film of 1972. 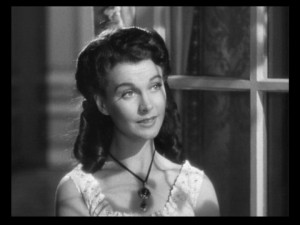 That Hamilton Woman – Vivien Leigh stars as a lower class girl who sleeps her way up the ranks until she gets to marry the British Ambassador to Naples during the Napoleonic Wars. Then, she meets Laurence Olivier’s Horatio Nelson (famous sea captain, also married) and falls in love. The two carry on their affair, regardless of the fact that everyone knows about it, because the two of them are so pretty that they just can’t keep their hands off each other. It’s essentially the real-life story of Leigh and Olivier’s relationship, except in reality Olivier kept all his arms and eyes. The two of them are as terrific as ever, and wonderful together. The #8 film of 1941.

It Should Happen To You – I saw this 1954 George Cukor film on TCM, which showed it in the 1.85 aspect ratio. I looked around the internet and couldn’t find anything definitive on whether that’s the correct ratio or not. It looks like it may have been cropped at the top and bottom at times. Regardless, it’s an excellent comedy with Judy Holliday as a young woman who wants to be famous so much she buys a billboard and puts her name on it. It works and soon she’s a hit in ads and talk shows and is fighting off Peter Lawford. This bodes ill for her relationship with documentarian Jack Lemmon, whose interested in reality, not celebrity. Cukor and Lawford do some great work in the scene following his and Hollidays first date, with Lawford falling out of and suddenly imposing himself back into the frame next to her as she tries to say goodnight to him and get into her apartment alone, menacing and comical at the same time, it’s a textbook case of the power of blocking to carry a scene. The #15 film of 1954.

I Love Melvin – Another celebrity-seeking girl from the early 50s is Debbie Reynolds in this musical by director Don Weis (The Affairs of Dobie Gillis). The draw is the reuniting of Reynolds with her Singin’ in the Rain costar Donald O’Connor (who seems a bit out of place as the romantic lead, but that’s all part of the film’s charm). Reynolds plays an aspiring actress (she plays the football in a Broadway musical) and O’Connor a photographer’s assistant at Look magazine who falls for her. He promises to get her a spread, or a cover in the magazine in order to impress her family so they won’t make her marry some rich zero. Many songs ensue. And I mean it: it feels like this movie has more songs per minute than any musical I’ve ever seen. They’re not particularly famous songs, but they’re well-written and the dance numbers are terrific (chock full of references to other musicals too: O’Connor does a few Kellys (including the lightpost pose from Singin’ in the Rain) and Astaires (the rollerskates number from Shall We Dance). It all adds up to a perfect bit of fluff. The #10 film of 1953.