A Cinema City film in all but name, as Tsui Hark directs for his own production company, Film Workshop, this comedy with pop star Sam Hui (of the Hui Brothers and Aces Go Places) and rock star Teddy Robin (of Tsui’s own All the Wrong Clues. Tsui himself rounds out the trio of workers trying to get by in the world of benevolent old owners and evil middle managers (none other than Ng Man Tat – it’s going to be weird seeing him as Stephen Chow’s sidekick again after he’s so great in these 80s villain roles (A Better Tomorrow II, My Heart is that Eternal Rose)). The three work in an instant noodle factory (is there a Cantonese word for ‘ramen’?) and play a variety of pranks to undermine the bosses. Much to the irritation of Tsui’s wife (Leung Wan-yui), Tsui brings the homeless Teddy home to live with them. Tsui and Teddy make a great comic pair: tall and thin with, as Bordwell puts it “an intimidating goatee” and short and squat and almost always wearing sunglasses. Sam falls in love with the boss’s daughter, Joey Wang, but she hides the fact that she’s rich from him (Sam wonders why a fancy Rolls Royce is always following them everywhere they go on their neon-lit dates through the city at night). Then everyone plays soccer and everyone cheats.

Rather than grafting a Socially Important Message onto an essentially silly comedy (the example that comes to mind is Eddie Murphy’s The Distinguished Gentleman, one of the worst movies I’ve ever seen), Tsui comes at it from the other direction. He takes what could be, in less interesting hands, a serious scenario about worker exploitation and the lives of the poor in a booming economy where the rich keep getting richer and makes a farce of it. The humor comes organically out of the heroes’ anarchic rejection of the social codes that enforce fealty to the bosses, no matter how treacherous they are. Every prank becomes an act of protest. Even the love story plays backwards: it is Joey’s superfluous wealthiness that is shameful, not the tiny apartment Sam shares with his mother. The politics isn’t the least bit profound, but it is a little revolutionary.

I was disappointed that Tsui’s breakthrough hit All the Wrong Clues (…For the Right Solution), lacked the oppositional elements that made his first three films so exciting, opting instead for pure farce and parody. His entry in the Aces Go Places series followed in that vein, privileging goofy special effects over not only politics but quality stunt construction (I much preferred the second film in that series, directed by Eric Tsang). Working Class I think gets closer to the heart of what makes Tsui a great filmmaker: the mixing of New Wave politics with popular genre filmmaking. It’s not the commodification or assimilation of leftist ideals into a corporate mainstream, but the repackaging of them as a shiny, goofy treat, a cookie full of arsenic for the exploitative middle managers of the world. 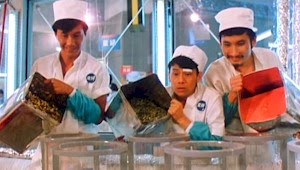