Running Out of Karma: Drug War 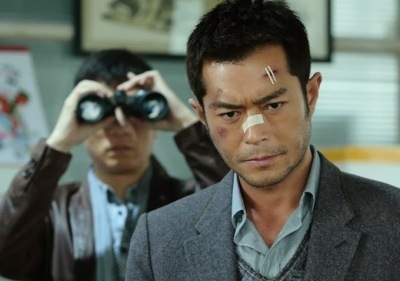 Taking a big leap out of chronological order, I want to write a bit about Drug War, Johnnie To’s second most-recent film, one that should be showing up on a lot of end of the year Best Of lists right around now. Running Out of Karma is my on-going series on Johnnie To and Hong Kong cinema. Here is an index.

From the beginning, it explains that this is not your typical heroic bloodshed Triad film, concerned more with codes of honor and brotherhood and the mirroring of good and evil than anything else. No, instead this is going to be a straight police procedural, with no metaphysical mumbo jumbo: “You’re a drug dealer, I’m a cop. I didn’t betray you, I busted you,” explains Sun Honglei’s Captain Zhang, and with that 25 years (at least) of Hong Kong genre convention, from John Woo’s A Better Tomorrow and The Killer to To’s own cop/Triad movies (Breaking News, PTU, Mad Detective, etc) is summarily dismissed.

What follows are the details of Zhang’s investigation of captured drug manufacturer Timmy and his gang, with Timmy as an apparently cooperating turncoat. He arranges a series of meetings between Zhang and his connections (the port-controlling Haha and the nephew of a drug lord), providing Sun with the opportunity to first play the spaced-out, taciturn junkie nephew in the meeting with Haha followed quickly by a Haha impersonation with the real nephew. Sun’s performance, as well as To’s coordination of a near miss in the lobby between the real and fake Hahas, is impeccable.

This sequence ends in the first, and least successful, of a series of climaxes. The film has a pulsating rhythm, slowly building tension through dialogue scenes, involving one character attempting to convince another that he is being genuine. This is the film’s Tarantinian inheritance: like Inglourious Basterds, Reservoir Dogs or Django Unchained it is structured as a series of conversations wherein one person attempts to convince another that he is who he says he is (even though we know he’s not). That tension builds to the point of eruption: first as Zhang has a bad reaction to some drugs he’s forced to take (in the film’s least plausible scene, but then I’m not an expert in heroin overdoses), then a tense yet comical roadside confrontation between Timmy and his subordinate truck drivers, then a shootout at a drug warehouse and then finally the film’s final sequence. To sticks doggedly to this structure, leaving no time for backstory or character development. This extends even to the visual style of the film: it flows and it’s lovely, but there are few self-consciously stunning or flashy shots. To has pared down his visual aesthetic in the same way he’s cut down the screenplay: only the essential. We learn about Zhang and his team through their actions: their relentless commitment to their jobs despite the almost total lack of sleep over several days (the cops who follow a suspect truck for 24 hours at the spur of the moment, the way no one wants to sleep when Zhang orders them to get some rest). There are no romances, no past traumas in need of working out, no wondering “if it’s all worth it”, just professionals doing a job.

The moral implications of that job are left to the viewer to tease out. Filming in China, under the restrictions of government censorship, prevents To from being straightforwardly political. Not that he would if he could, as he’s always been more interested in tension and contradiction than polemic or advocacy. But the power of the cops on display here, both in determination and technological prowess (manpower, firepower, tiny cameras and bugs and computers and more: they manage to take over an entire port in a matter of hours!) is impressive, surely enough to satisfy any authoritarian. Perhaps too much: it seems designed to unnerve rather than valorize. As with the 2007 Milkway Image film Eye in the Sky, the film often mixes in images captured from surveillance cameras. This visual trope seems to be growing in popularity as a conventional shorthand for the Big Brother-ness of the PRC government: it’s always watching. (Vivian Qu’s recent film Trap Street explores this metaphor more explicitly.)

In To’s 2011 Life Without Principle, the Triads are beginning to look a bit desperate in the wake of the latest global financial crisis. While they come off slightly more organized here, their grasp on power has certainly been shaken since the late-90s Handover days of The Mission or Exiled. It’s no coincidence that all the cops are played by Mainland actors while all the crooks are Hong Kongers. It’s not just the censor-passifying implication that the criminal element are “outsiders” but also a complication of audience sympathies, especially for those who recognize Lam Suet and Lam Ka-tung and Lo Hoi-pang from previous To films. Beyond that is the performance of Louis Koo, hero of many of To’s films, usually as a romantic lead, the Election films being notable as the only other time he’s played a crook for To. Like those two films, Koo, despite his criminality, plays a sympathetic figure. He’s the only character in Drug War who hints at a past, the only one to ever show any kind of emotion (a very moving scene where his gang mourns the death of Koo’s wife and her brothers, where they are so desperate to show their respect for the departed that they burn real money (the burning of fake money being a traditional mourning activity: it gives the dead some cash for the afterlife)). Even at the end, we can’t help but admire Timmy’s desperate gasps at self-preservation. He orchestrates the finale, bringing cops and crooks together on a city street for a bloody shootout, and does all he can to intensify the chaos, killing cop and criminal alike. It’s only in confusion that he can hope to escape. He has no loyalty to either side: his will to live supersedes any sense of order. Face to face with human desperation, both structures: the seemingly omnipotent power of the state and the criminal gang from capitalist Hong Kong, crumble.

But of course, Timmy doesn’t get away. Zhang, the agent of the state, handcuffs himself to him in his final moments and Timmy, frantically clawing against him like a rat in a cage, dragging Zhang’s body around as he’s surrounded by the military units of the Chinese police, stands as a potent symbol of both the useless, inevitably self-destroying violence of the criminal life and the helplessness of the single individual against the power of the state. The film’s coda, Timmy’s execution as he babbles everything he knows about China’s criminal underworld in a final attempt at freedom, is terrifying in its clinical matter-of-factness. In the end, there’s no escape for him, but even in those last moments, he’s not allowed a kind of human or even spiritual understanding. All he is is a repository of criminal knowledge. All he is is a job.

2 thoughts on “Running Out of Karma: Drug War”