Jiang Wen’s Gone with the Bullets

So Jiang Wen made a Wong Jing movie. . .

I saw the Thai DVD, which is the first version I’ve seen that has English subtitles. The running time is 119 minutes. Wikipedia and IMDB give it a running time of 140 minutes, with a 120 minute international cut, while Screen Daily‘s review from the Berlin Film Festival says it’s 134 minutes. I have no idea what’s been removed for this international cut, but I doubt the added footage would make the movie any more or less coherent.

Jiang plays a conman in 1920s Shanghai. In an opening parody of the first scene of The Godfather, he agrees to help the youngest son of the local warlord general launder his money. To do so, he spends it all on an extravagant pageant to crown the Best Hooker in Shanghai, complete with musical numbers (“a song so new Mr. Gershwin won’t even write it for ten years!”), fireworks, live radio coverage around the world and Shu Qi offering to sleep with 30 rich men in 30 nights and give all her proceeds to the poor. Shortly thereafter, she proposes to Jiang (they are old friends and lovers), he tries to talk her out of it in a melange of artificial sets and dizzying cutting (every line gets its own shot, the effect of which, given the screwball pace of the exchanges, is something like watching a Baz Luhrmann movie on amphetamines), culminating in an opium dreams of a wild musical car trip. The morning after, Shu Qi is dead and Jiang spends the rest of the movie on the run, accused of her murder.

The case becomes a celebrated scandal, complete with an “I Shot Jesse James” theatrical reenactment, which is eventually turned into a movie (claimed to be “China’s first feature film”) and which the filmmakers (with the help of the local star detective (Jiang’s former friend and partner in crime) try to get Jiang himself to star in, so they can execute him live on film. The director is the warlord general’s daughter (Zhou Yun), who is also in love with Jiang. The various principals spend the final third of the film either trying to kill Jiang, trying to save Jiang, or trying to convince Jiang that they’re trying to save him so that they can kill him more easily. It all comes to a head at a red windmill, recalling both the Moulin Rouge and Don Quixote, the primal creation of cinema as an act of self-delusion and self-destruction, a lunatic blur of indeterminate authenticity, a world diving headfirst into modernity at hyper speed. The film ultimately resembles nothing so much as The Great Gatsby: far more successfully than Luhrmann’s adaptation, it captures the world not as Nick Carraway saw it, but how it must have existed in Gatsby’s mind, gorgeously opulent, endlessly malleable and desperately lonely.

The Screen Daily review assumes that the film is an attempt to reach Western audiences, and judges it a failure based largely on its inability to do so. On the contrary, I can’t imagine anyone thinking a movie this tonally bizarre would appeal to American or Western crowds taught that movies can only be one thing, and that that one thing must be clearly stated at least three times. This is a movie designed for audiences familiar with the dizzying blends of comedy, romance, violence and melodrama that characterize the popular cinema throughout Asia, not the sterile expectations of the West. Jiang’s movies, going back at least to Devils on the Doorstep, are never that simple. A dense melange of potent signifiers, abstractions and falsifications, the film is incredibly hard to parse at any given moment, a cardinal sin in a Western film culture that demands the audience always be able to know where they are and where they’re going. Gone with the Bullets does for the musical comedy what The Sun Also Rises did for the period art film and Let the Bullets Fly did for the action film; all are wholly unique, wholly unexpected variations, pushing each genre beyond their conventional notions of realism and into the fantastic. It finds in modernity such a dense web of performance/lies that any kind of truth is unattainable and unsustainable and incommunicable, and asks what the role of the filmmaker then is in such a world. One answer is to throw, the biggest, craziest party imaginable. Jiang Wen’s sin is that he shows us the party and the hangover as well. 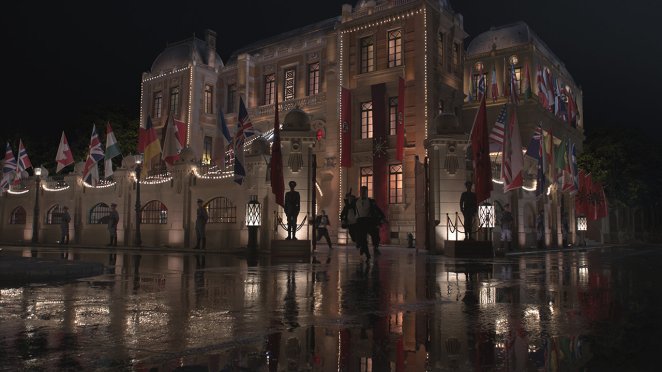 2 thoughts on “Jiang Wen’s Gone with the Bullets”